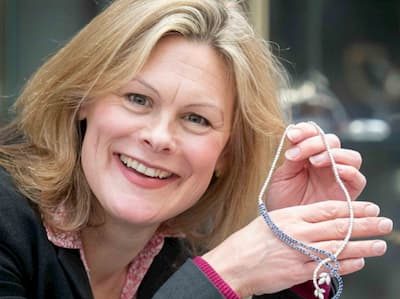 Kate Bliss is a British approved registered valuer, antique expert and television personality. She appears as an antique expert on Bargain Hunt, Put Your Money Where Your Mouth Is, Antiques Road Trip and Flog It!.

She was born under the name Kate Alcock.

She was born in 1975 in Herefordshire, England.

She graduated from Brasenose College, Oxford with a bachelor’s degree in English Literature. She later studied fine art and specialised in jewellery & silver and became a member of the Royal Institution of Chartered Surveyors.

Bliss has not revealed the name of her parents but she revealed that her father had two successful auctioneering businesses, one dealing in antique furniture and another in vintage cars.

Kate is married to Jonathan Bliss since 2005. The couple first met while Kate worked at Auctioneers and Valuers Brightwells in Hereford at the time Jonathan was a senior partner of Brightwells.

Bliss and her husband have two children together a son named, Benjamin Bliss and a daughter, Lily Bliss.

She was born into a successful auctioneering business as growing up she would rummage for treasure in her father’s salesroom.

“My father had his own saleroom when I was growing up so I started rummaging for treasure and sitting on the auctioneer’s rostrum, from an early age. I think a lot of the antiques business is in the blood. So many traditional dealers impart their knowledge and enthusiasm to the next generation, and so the tradition continues. My father certainly taught me how to auctioneer and command the room. My parents love antiques and quirky objects (my mother’s idea of a great Christmas present is an antique shrimping net!) and their passion has rubbed off on me. I also loved studying the craftsmanship of pieces and the history behind them.”

Kate is an approved registered valuer with the Royal Institution of Chartered Surveyors and a Fellow of the Gemmological Association of Great Britain.  She runs her own valuation practice and is a consultant with a number of UK auction houses, undertaking valuations in her home county of Herefordshire, London and the provinces.

Her shop, Kate Bliss Ltd offers independent specialist advice regarding the valuation of jewellery, fine art & antiques for the purposes of insurance, sale, tax (Probate) or family division. They provide bespoke inventories and valuations which are recognised by leading insurance brokers, Her Majesty’s Revenue and Customs and the legal profession.

Kate is an antique expert on Bargain Hunt which she says she got by chance. She was approached by the production team while they were filming a Bargain Hunt episode at the saleroom where she was auctioneering.

“I was the only lady auctioneer at my local saleroom and we were a bit of a novelty then (it’s going back a bit!). So I was asked to appear on the show as the auctioneer and then quickly followed as an expert. I will never forget turning up on my first shoot in my high heels feeling very proud in my new suit but the fair we were filming at was outdoors and it rained the entire weekend. I ended up wearing Philip Serrell’s wellies which were 3 sizes too big!”

She has appeared on a variety of BBC antiques programmes including Put Your Money Where Your Mouth Is, Antiques Road Trip and Flog It!. She was also the main presenter for two series of Secret Dealers for ITV.

She has an estimated net worth of $1.2 million.