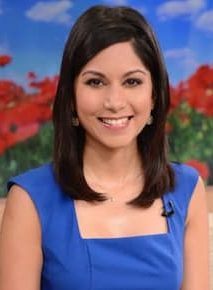 Aditi Roy is an Indian-American media personality serving as a general assignment reporter for CNBC based at the network’s San Francisco bureau, [email protected] She previously served as a West Coast correspondent for ABC News and also anchored the morning and evening newscasts at NBC10 in Philadelphia.

Roy celebrates her birthday on the 18th of September but her exact year and place of birth are unknown.

Her height is not known.

She is an Indian-American.

Aditi is the daughter of Gopa Roy. Her parents were Indian immigrants. She hasn’t revealed any further information regarding her parents and her father’s name is not disclosed.

Roy was brought up alongside her brother Avi Roy but not much is known about him.

She is married but due to her secret personal life identity, her husband is left unknown to the public up to date. In October 2012, Roy took a leave and went on a vacation to West Coast. She was later spotted with an engagement ring.

Aditi and her husband are proud parents of two children with their firstborn named Saya but information of the other child not revealed.

Aditi joined CNBC in July 2016 and previously serves as a general assignment reporter and based at the network’s San Francisco bureau, [email protected]

Prior to joining CNBC, Roy was a West Coast correspondent for ABC News, reporting for all of the network’s broadcasts and platforms. There, she covered a wide range of stories ranging from consumer-facing products and a Delphi self-driving car to the 2013 Target breach and severe weather across the West. She also anchored the morning and evening newscasts at NBC10 in Philadelphia. Here, she covered education extensively in addition to filling in as an NBC News correspondent, appearing on NBC’s TODAY and Nightly News as well as MSNBC. She also served as a reporter and photographer at KLKN-TV in Lincoln, Nebraska and later worked as a reporter at KHQ-TV in Spokane, Washington.

Adit has been recognized with 8 Emmy nominations including,  “Best General Assignment Reporter” in 2008, “Best Feature News Story” in 2007, and “Best Hard News Reporter” in 2004 and 2005. In addition, she was named “Best News Anchor” by Philadelphia Magazine in 2009.