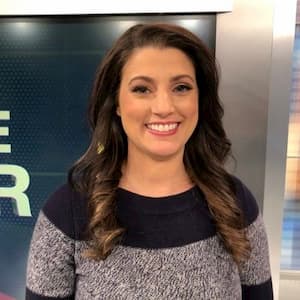 Allison Chinchar is an American media personality working as a  meteorologist for CNN and HLN. She appears regularly on CNN’s ‘New Day Weekend’ and HLN’s ‘Weekend Express’, as well as CNN International programs and previously  served as a meteorologist at local stations including  Buckeye TV,  WTVC-TV News Channel9 and WKRN-TV .

Allison stands at a height of 5 feet 6 inches tall.

Chinchar graduated with a Bachelor of Science degree in Atmospheric Science from The Ohio State University.

She hasn’t revealed any information about her parents.

No information about her siblings is available.

Chinchar is married to Michael Bettes, an American television meteorologist and storm chaser working for The Weather Channel in Atlanta, Georgia and  was a co-host of AMHQ: America’s Morning Headquarters. He  graduated with a B.S. in atmospheric sciences from Ohio State University. The duo exchanged their marriage vows in October 2012 in Atlanta, Georgia, United States after dating for a couple of years. Mike was previously in a relationship with his co-host, Stephanie Abrams whom he worked with at The Weather Channel. The two broke up but reasons for their separation remains unclear.

Allison and her husband has a son together, Landen Benjamin Bettes who was born in January 2015 weighing 8 pounds and 3 ounces .The couple  announced that Allison was pregnant on 26th July 2014 via Twitter.

Allison joined  CNN in June 2015 and works as a meteorologist for CNN and HLN. She appears regularly on CNN’s ‘New Day Weekend’ and HLN’s ‘Weekend Express’, as well as CNN International programs. She previously served as a meteorologist at local stations and has covered everything from hurricanes, blizzards, flooding events and wildfires. She also covered the Super Tornado Outbreak of April 2011 when over 350 tornadoes hit the Southeastern United States in just four days, with over 200 of those on April 27th alone and  has also covered volcanoes, earthquakes and other natural disasters

Prior to joining CNN, she worked as a meteorologist at Buckeye TV where she produced and hosted weather conditions and also worked as a meteorologist at WTVC-TV News Channel9 from  March 2008 to January 2011 before  joining WKRN-TV in January 2011. She is also a member of the American Meteorological Society, the National Weather Association, and the International Association of Broadcast Meteorology.