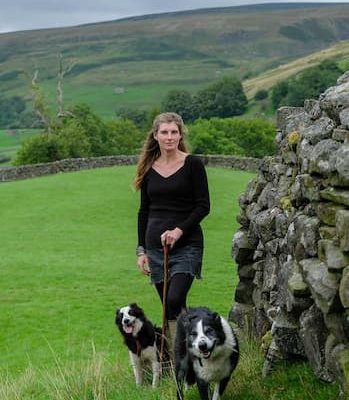 Amanda Owen is a shepherdess, bestselling author and television personality. She appears on Channel 5 ‘Our Yorkshire Farm’ series, an observational documentary series that follows the life her family on the farm.

She stands at a height of 6 feet 2 inches tall.

Owen is the daughter of a model and an engineer. The names of her parents are unknown.

Amanda is married to Clive Owen since 2000. The couple first met in 1996 at Clive’s farm at Ravenseat. At the time, Amanda was 21 years old. She had been sent by her boss to collect a ram at the farm.

According to The Guardian, she said that Clive’s house was a ” shit-hole. Smoke-stained wallpaper and carpets so damp that they squelched. And an all-pervading air of sadness.”

“I don’t want to say it was desolate but there was a TV programme called The Dale that Died and that was how it felt. Yet at the same time, you could feel that it had once had something else, been something more. I wanted to breathe life back into it.”

Owen is a shepherdess who was inspired to become a farmer after finding the hill shepherd book in the library and seeing photographs of remote farming.

“It was the pictures, it was the landscape, it was the people — everything in that book just appealed to me. It wasn’t glossing over the hard side, it was very real and very gritty and atmospheric but it was just the thought of working outdoors and actually doing something, having a physical job where you were out there feeling the elements — windburn, sunburn, rained on, all the rest of it — sounded like a good idea back then.”

Amanda is a cast member of ‘Our Yorkshire Farm’, an observational documentary series on Channel 5. The series focuses on the story of Amanda Owen and her family as they live a traditional rural lifestyle. The show is filmed on the family’s Ravenseat Farm which spans 2000 acres, is 1,800 feet above sea level, and located three and a half miles West of Keld, Swaledale.

Is Amanda Owen a Gypsy

Amanda is not a Gypsy.