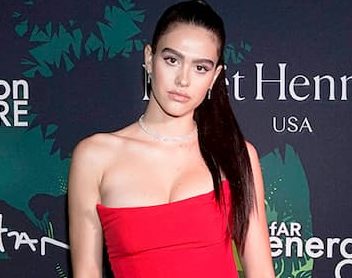 She stands a height of 5 feet 9 inches tall.

Amelia is the daughter of Lisa Rinna and Harry Hamlin. Her father, Harry is an actor and entrepreneur known for his roles as Perseus in the 1981 fantasy film Clash of the Titans and as Michael Kuzak in the legal drama series L.A. Law

Her mother, Lisa is an actress and television personality. She is best known for her appearance on Bravo’s hit reality television series The Real Housewives of Beverly Hills.

Amelia has an older sister known as Delilah Belle Hamlin who is also a model.

Amelia is a model signed with Women 360 Management in New York since June 2020. She was previously signed to IMG.

On February 9, 2020 she walked the runway at the Dennis Basso New York Fashion Week alongside her mother Lisa Rinna and sister Delilah Belle Hamlin.

Gray first revealed she was battling anorexia in 2018. On August 25, 2020 in an episode of ‘The Skinny Confidential Him & Her Podcast’ she revealed that it took family intervention for her to get treatment.

She said that the eating disorder began when she was about 14 or 15 and was upset by her appearance in paparazzi photos that were taken when she was leaving a store with her mom. She decided to do the Master Cleanse after reading online that a model she had looked up to at the time would always do it ‘before a huge job.’ She did it for 25 days, only occasionally allowing herself soup or a couple of sweet potato fries. Then she started ‘working out a lot’ to combat what she was eating when she was out with her friends.

‘Even if it was one in the morning, like I would go in the gym ’cause I was living at my parents’ house and I would just work out, run on the treadmill.’

One day her mother came into the gym and asked her what was going on because her sister, Delilah Belle Hamlin, thought she was anorexic.

“I was like, ‘No, Delilah just doesn’t want me to ever be skinnier than her.’ So this was an ongoing thing for a long time where they didn’t know that there was actually anything wrong because I would just be like, ‘No, Delilah was trying to sabotage me.’”

She said she could have lost her life if her family didn’t intervene. “I woke up one morning at my childhood’s best friend’s house. It was seven in the morning. My parents, my sister, they’re all outside, like waiting to pick me up. And I’m like, ‘What are you doing here? Like it’s Saturday morning.’ And they’re like, ‘Get in the car. We’re going to UCLA [to get treatment] and I was like, ‘Oh my God.’ And in that moment, I was like, ‘I’m going to rebel, like, they’re crazy. I don’t have an eating disorder.’

We show up, it’s like this really scary old man’s office. …He looked at me and – I took this man seriously, he was very legit scary – he looked at me, and he was like, ‘so yeah, basically at this rate in about four months, you’re going to be 45 pounds, and you’re going to be dead.’ And I just remember, ‘wait, what? That’s humanly possible?’

I just snapped out of it. Like I was so lucky that I was just like, ‘Yeah, I don’t want to be 45 pounds.’ I’m not going to be this type of person. I’m not going to ruin my life because of whatever issues I’m having. You don’t need to be skinny to, like, live your best life. Like it’s either ‘be skinny and die’ or like, happy and be who you are.”

Amelia has appeared on The Real Housewives of Beverly Hills severally as her mother is a main cast. She was accused of faking her eating disorder to get more “air time” on the show but she shut down the allegations saying that being on the show is the last thing she wants to do and is actually forced to be on it by her mother.

“Lying about a mental illness is disgusting. Something I hope nobody would ever do. I seriously can’t believe I’m being accused of lying about my anorexia to get more ‘air time’ sorry but I’m forced to be on the housewives by my mom. Ask anyone it’s the last thing I want to do. I couldn’t care less about air time.”

Who is Amelia Hamlin Dating

Hamlin is alleged to be dating Scott Disick, although none of them has confirmed or denied the rumors.

Amelia is alleged to be dating Scott Disick after the two were photographed together arm-in-arm on the beach in Malibu. They have not confirmed whether they are dating or not.

The two were first linked together after they were spotted arriving together at Kendall Jenner’s 25th birthday party. Amelia however denied the rumors that they were dating.