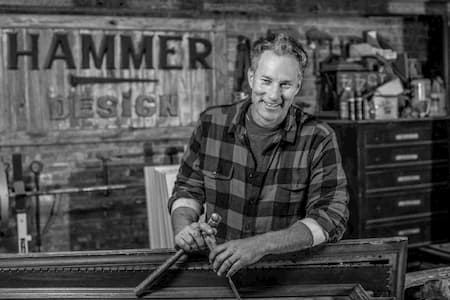 Ari Smejkal is the founder of Hammer Design Group and a business partner of Alison Victoria, they both feature on the HGTV series Windy City Rehab, which follows Alison as she renovates rundown houses throughout her native city Chicago.

He is married to Lala Leslie Ryan, he was previously married to Suzette Smejkal, it is not clear whether they are divorced but she doesn’t feature on his socials.

Ari has three sons with his older son Taner following his footsteps as he works as a carpenter. They all help him in his hammer design and also features on Windy City Rehab.

He has two daughters with his wife Lala, Everly Luc Arden Smejkal and Scout Finnleigh Smejkal.

The two met while working as cabinetmakers for Chicago-area tony restaurants and theaters. They were each hauling home leftovers from woodworking jobs and combining lumber scraps with architectural odds-and-ends to make furniture for friends. In 1994 they combined their collections of tools and paraphernalia, rented a 2,000-square-foot storefront in Barrington.

Smejkal is the founder of Hammer Design, which is a craftsmanship and artistry group. According to their website “Smejkal started woodworking at 15 alongside his grandfather and father. This artisan mindset and expertise has been passed down from generation to generation starting with Ari’s great grandfather a Czechoslovakian carpenter. As a young child, Ari would spend hours working with his hands and still today is inspired by the world around him. The family tradition continues today with Tanner, Ari’s oldest son, working by his other two sons helping when home from college. ”

Ari is a business partner for Alison Victoria and features on HGTV’s Windy City Rehab. The show follows Alison as she renovates houses in her hometown of Chicago.

Ari is also an artist who has been commissioned to create unique pieces by many clients.

@thealisonvictoria #season2 @windycityrehabchi Please tune in to see my Artwork on display during season 2 and ,Paintings are avaiable at The Gallery of Lake Forest !!!! Come visit my gallery opening this Wednesday night @thegallerylf