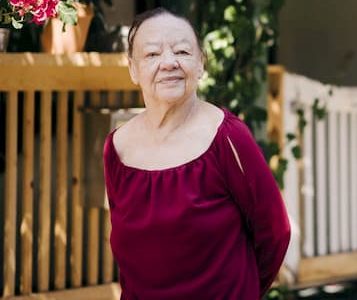 Audrey was in a relationship with Little Richard although the relationship was not in the conventional way, according to Richard’s autobiography. The couple first met in 1956 when Little Richard looked out of a hotel window in Savannah, Ga., and spotted Audrey who at the time was 16 years old and Richard was 24 years at the time. According to Richard’s autobiography, he pursued her and they became intimate, though not in the conventional way. The autobiography alleges that he liked to watch while she had sex with others.  Angel Lee however denied the claims.

After Richard’s religious conversion, the two lost contact. Robinson later became a stripper using the name Lee Angel. The two reconnected in the 1960’s, Robinson feared being close to Richard again due to their contrasting lifestyle. The two however remained close friends.

Little Richard whose real name is Richard Wayne Penniman was an American singer, songwriter, and musician, and self-proclaimed architect of rock ‘n’ roll. He got his first record contract with RCA in 1951, but they stifled him by signing him to do low key blues songs where he was unable to use his trademark screams and wails.

He found success in 1955 with his signature style when a producer from Specialty Records hired him on to be the frontman for a New Orleans group. That year his first hit, “Tutti-Frutti” made it to number 17 on the Billboard Charts.

Little Richard was gay although he struggled with his sexuality. He had a strong faith in Christianity. During an interview with Three Angels Broadcasting Network in 2017, he said it was “unnatural” to be gay.

“Anybody that comes in show business, they gon’ say you gay or straight. God made men, men and women, women… You’ve got to live the way God wants you to live… He can save you.”

He also described his sexual orientation as ‘omnisexual’ during a conversation with Dr. Rock.

“We are all both male and female. Sex to me is like a smorgasbord. Whatever I feel like, I go for. What kind of sexual am I? I am omnisexual!’”

In a 1995 interview however he had admitted that he was gay, and had been all his life.

“I’ve been gay all my life and I know God is a God of love, not of hate. How can I [put] down the fisherman when I’ve been fishing all my life?”

Little Richard died on May 9, 2020 at the age of 87. His death was confirmed by his son Danny Jones Penniman.

How Did Little Richard Die