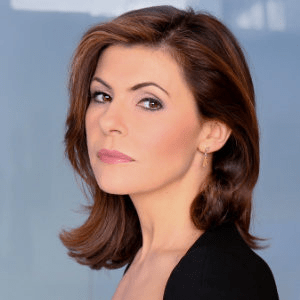 Barbara Serra is a British based journalist and newsreader serving as presenter and correspondent at Al Jazeera English since 2006 and a presenter and commentator with the Italian TV network, RAI, since 2007.

In 1993, she moved to the UK to study International Relations at the London School of Economics and Political Science. She then undertook a Postgraduate Diploma in Broadcast Journalism at City University, London, to train as a journalist.

Serra is an English national.

Her father is a Sardinia native, and her mother is from Sicily.

She has a sister called Irene Serra.

Serra is married to Mark Kleinman, city editor for Sky News and they live in London.

She has a son with his husband, Mark Kleinman.

Serra joined Al Jazeera English in April 2006 as news presenter and correspondent. She anchors the main evening news programmes from Al Jazeera’s London broadcast center and has also reported extensively from across Europe and the Middle East.

Since September 2007, she has also co-presented a weekly Programme called TV Talk, broadcast on Italian state TV RAI from the Al Jazeera studios in London. The TV Programme broadcasts on RAI 3, with Serra regularly speaking out about the lack of female representation on Italian television.

Prior to joining Al Jazeera, Barbara worked for the BBC as a researcher. She spent three years working as a producer/presenter for BBC London News and produced on Radio 4’s Today Programme. She regularly presented Euro News on BBC Radio Five Live. Her most challenging on-air moment was having to improvise a 5 minute radio bulletin without any scripts due to a technical mishap.

In 2003, she joined Sky News as a reporter, working on both domestic and international assignments. Serra covered a wide range of stories, from the death of Pope John Paul II in Rome, to the Michael Jackson trial in California.

She became part of the Five News team in 2005, following a deal between Sky News and Five to deliver Five’s news programming. She became the first news presenter in the United Kingdom to present a prime time news Programme in her second language on terrestrial television, with her first language as Italian.

In March 2014, Serra won the Comete award for her book released in the same year. She also won the third edition of the Caccuri Literary Prize with the book, Gli Italiani Non Sono Pigri.

She was recognized by Elle Italia as one of the 20 most high profile Italian women internationally, along with Monica Bellucci and Miuccia Prada.

In November 2015, Serra became the second woman to receive the prestigious 12 Apostles award, after Nobel Laureate Rita Levi-Montalcini was awarded it in 1991. The award was presented for Serra’s work as a writer and journalist.

As an author Serra has published the book, ‘Gli Italiani Non Sono Pigri’ (Those Lazy Europeans). The book was published in Italian only. It was released in 2014. When asked by ITALY Magazine about her book, she stated that she wanted to study European stereotypes and the real reason why many of those stereotypes exist. The book covered the stereotypical view by some that Southern European countries are lazy. Serra comments in the book that certain societies in Europe are simply less efficient than others and studies the causes of this.

Serra is also a regular writer and commentator for the Huffington Post.

Her film, Fascism in the Family, is about a personal look at Mussolini’s regime and how Italy may now be embracing fascist ideologies most believed gone forever.

Serra, examines her own family’s links to Benito Mussolini’s regime to see if Fascism really is resurfacing in Italy today.

Her grandfather was the fascist mayor of a key mining town in Sardinia which was used as a place of exile and punishment for political dissidents and prisoners of war.

Her net worth is estimated to be between $1- $5 million.