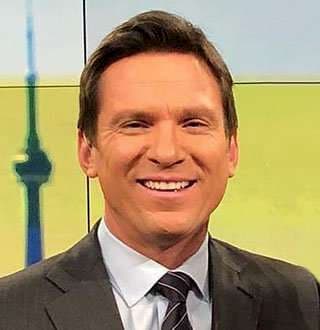 William Francis Weir is an American media personality working as  a correspondent and anchor for CNN . He is the creator and host of the global documentary series “The Wonder List with Bill Weir.”  and previously worked as a co-anchor of Nightline on ABC television network in the United States and also co-anchored the weekend edition of Good Morning America.

Bill was born on 19 December 1967 in Milwaukee, Wisconsin, United States.

Bill attended  Victory Christian High School in Tulsa, Oklahoma before  briefly attended Oral Roberts University then transferring to Pepperdine University in Malibu, California where he earned a degree in journalism and creative writing.

At an early age, his parents divorced . In an article ,my family tree split by Trump written by Bill ,explains how he was raised, “My father was a liberal, atheist homicide detective who fled Milwaukee’s inner-city chaos for the serenity of the Rockies. My mother left him when I was 2, found Jesus when I was 4 and one Saturday announced over breakfast “I had a dream from God last night.” We were under Divine orders to leave Milwaukee ad move to the Bible Belt, she explained, so she could pursue a career in televangelism. “Tell your Dad I’ll  give up alimony and child support if he lets us go. Jesus will take care of us.” A few weeks later we were headed south, modest U-Haul in tow. But God kept changing his mind. I went to 17 schools in six states as Mom followed her dreams. Literally.”

It’s not known if he has any siblings.

Bill is married to Kelly Dowd , a Director of Sales/ Mackage Outwear and U.S Sales Manager at the APP Group. He proposed to her in September 2019  during a ride through Brooklyn.  Weir was previously  married to Angela Weir, a Brooklyn based lawyer. The couple secretly had a wedding and for some undisclosed reason, divorced but they had a daughter together.

Bill and his wife has a son named William River who was born in 2020. He also has a daughter with his  ex-wife  named Olivia Weir who was born on 19 December 2003. She shares a birthday with her dad .

Weir joined CNN in November 2013 as an anchor and Chief Innovation Correspondent .He created the primetime CNN Original Series “The Wonder List with Bill Weir” in 2015. Over three seasons, he traveled the world in search of unique people, places, cultures and creatures on the brink of seismic change.

After helping to launch the weekend edition of “Good Morning America” in 2004, Bill became co-anchor of “Nightline” in 2010 while his reporting was featured on “World News with Diane Sawyer,” “Good Morning America,” “20/20” and his own Yahoo! News digital series, “This Could Be Big.”

In his network career, he travelled to 49 states and more than 50 nations, covering breaking news and uncovering global trends. He has interviewed heads of state and industry along with stars of stage and screen.

Weir joined ABC News in 2004 where he covered breaking news and global trends such as the economic rise of China and India, signature features on Good Morning America ,World News devoted air time to his reports from Africa, the Middle East and the South Pacific. He went to New Orleans after Hurricane Katrina, as well as to Afghanistan in 2010 and led the network’s coverage of Iraq, Where Things Stand at the height of the American troop surge. Weir has anchored several launches and landings of the Space Shuttle, was the first American to broadcast live from Tibet and led off 2007’s Earth Day special with an unprecedented underwater live report from the Great Barrier Reef. His adventure reporting includes jumps from hot air balloons, hikes deep into the Amazon and one fun night spent lashed to the side of Yosemite’s El Capitan.

In June 2007, Weir was named anchor of the short-lived ABC News magazine “iCaught.”. As a writer and anchor at ABC, he produced special hours for the network on topics ranging from religion to brain science to the rise and fall of General Motors. In July 2010, he was named co-anchor, joining Terry Moran and Cynthia McFadden on Nightline, replacing Martin Bashir.  Before joining ABC News, Weir wrote and hosted projects for the FX and USA Networks and was an anchor/reporter in Los Angeles, Chicago, Green Bay and Austin, MN.