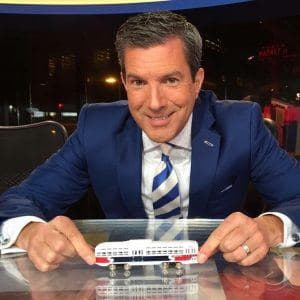 He was born on February 11, 1963 in Northeast Philadelphia.

Bob is married to Carrie Howard Kelly, a Certified Child Life Specialist. In 2016 the couple launched BK5K For Child Life, an annual fundraising event. The main aim of the event was to raise enough funds to build a playroom and sensory place for kids at Nemours/Alfred I. DuPont Hospital for Children, where Kellys’ son Austin received excellent medical attention.

Bob was married to Colleen but the couple divorced in 2008. They have two daughters together. At the time, Bob said there was no drama and their focus was on their two daughters.

Bob is a father of six children. He has two daughters known as Madison and Kristen. Kristen is a Kindergarten Teacher in Upper Merion.

Give your little girls a big hug today. #nationaldaughtersday

Bob works as a traffic anchor and feature reporter for FOX 29 News since October 2014. She serves as the traffic reporter for “Good Day Philadelphia.” He also hosts the regular morning segments “Kelly’s Classroom,” “Breakfast with Bob,” and “Town Takeover.” He’s also co-hosted the Philadelphia St. Patrick’s Day Parade for more than 15 years.

He previously worked as the Traffic Anchor for 13 years at CBS 3 in Philadelphia.  “I was able to take something as cut-and-dry as the traffic and have some fun with it. They came and said, ‘Do you think you could bring this shtick to TV? We could use somebody to liven up our morning show.’ This was before the internet and Facebook and photos online. You hit TV and it’s like, ‘So that’s what that guy looks like!’”

He became the first Philadelphia traffic anchor to do his reports in front of the green screen. He began his career as a radio disc jockey. When traffic became news, he joined KYW News Radio with Traffic on the 2s.

“I got started at 102.9 MGK and worked up and down the dial at all the hot stations but the music industry was starting to change. Fewer DJs were actually live on the radio; everything was prerecorded. My agent said to me, ‘Traffic is going to be huge. What if you DJ that?’ Traffic is live; it’ll always be live, you can’t prerecord it. So instead of talking up the Rolling Stones, I decided to DJ the traffic.”

National Candy Day. Go ahead and stick your hand in the bucket…what is your favorite candy?