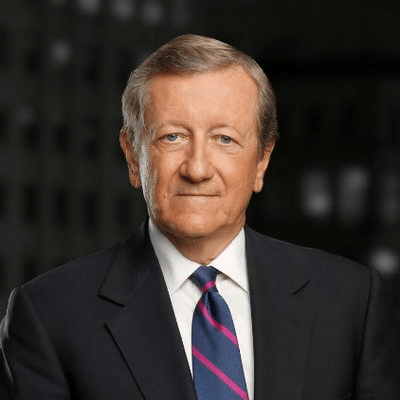 Brian Ross is an American investigative journalist who served as the Chief Investigative Correspondent for ABC News until 2018. He reported for ABC World News Tonight with David Muir, Nightline, Good Morning America, 20/20, and ABC News Radio.

He graduated from the University of Iowa journalism school in 1971.

Ross was born and raised in Chicago, Illinois and its unknown whether he has siblings or not.

Brian got married to Lucinda Sanman in 1985.

It is not clear whether the couple has kids or not.

Brian is an award-winning investigative journalist who serves as ABC News’ Chief Investigative Correspondent. He reports extensively for “World News Tonight with David Muir,” “Nightline,” “Good Morning America,” and “20/20,” as well as for ABC News Radio and “The Blotter” on ABCNEWS.com. Ross joined ABC News in July 1994.
In addition to filing for all ABC News broadcasts, he files reports for ABC News Radio, available to 2,500 affiliates around the country. He also reports throughout the day for the Investigative Unit’s website, “The Blotter,” on ABCNEWS.com. Since launching in April 2006, the Blotter has quickly become one of the most popular destinations on ABCNEWS.com, receiving an average of 5 million readers a month.
Prior to joining ABC News, Ross worked for 20 years at NBC News, reporting for the “NBC Nightly News” and “Dateline NBC.” In an award-winning two-part report for “Dateline NBC” in 1992, Ross exposed Wal-Mart’s use of child labor in overseas sweatshops to provide clothing for their “Buy American” campaign.
Ross also broke stories about French intelligence spying on American businessmen and was the first reporter to track down the fugitive Marc Rich at his Swiss hideaway. Ross solidified his reputation for investigative reporting by breaking stories such as the 1980 ABSCAM story.
He began his professional career in 1971 as a reporter at KWWL-TV in Waterloo, Iowa. He later worked at WCKT-TV in Miami and WKYC-TV in Cleveland.

ABC News suspended Ross in December 2017 for four weeks without pay after he was forced to correct a bombshell on-air report about Michael Flynn, the retired lieutenant general who briefly served as President Trump’s national security advisor.

Ross reported on air that President Donald Trump directed Flynn to make contact with Russia’s government during the 2016 presidential campaign.

“We deeply regret and apologize for the serious error we made yesterday,” ABC News said in a statement . “The reporting conveyed by Ross during the special report had not been fully vetted through our editorial standards process. As a result of our continued reporting over the next several hours ultimately we determined the information was wrong and we corrected the mistake on air and online.”

As new outlets reported that Flynn had decided to cooperate with special counsel Robert Mueller’s investigation into Russia’s meddling in the 2016 election, Ross went one step further.

When he returned from his suspension in January, he retained his title as chief investigative correspondent, but moved to Lincoln Square Productions, a separate unit of ABC that produces documentaries and special reports. From there, Ross and Schwartz worked on long-term projects, but did not contribute to live special reports or stories related to Trump. In late May, Ross returned to the air for an investigative report about the failures of the ankle bracelet monitoring program.

He joined the Law&Crime Network as chief investigative correspondent in 2018 after decades of award-winning work at ABC News and NBC News.

His reports have exposed government and corporate corruption around the world and helped bring justice to the disenfranchised.

He has been repeatedly honored with the most prestigious awards in journalism, including seven DuPont-Columbia Awards, six Peabody Awards, six Polk Awards, 16 Emmys, five awards from the Overseas Press Club, and five Edward R. Murrow Awards and many more.

Ross has not revealed his net worth to the public.