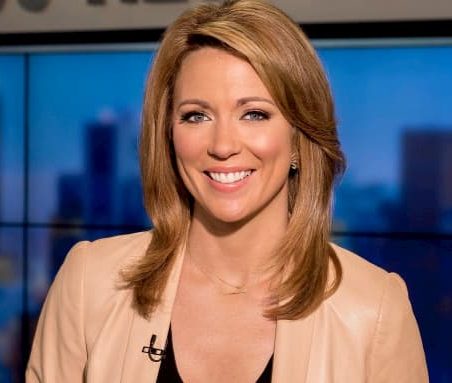 Brooke Baldwin is an American media personality serving as a CNN anchor. She hosts ‘CNN Newsroom with Brooke Baldwin’ from 3 pm to 4 pm ET on weekdays. She also creates and hosts CNN’s Digital series “American Woman”.

Baldwin earned a double bachelor’s degree in journalism and Spanish from the University of North Carolina at Chapel Hill. While at UNC, she also studied at the Universidad Ibero Americana in Mexico City.

Brooke is the daughter of Steven Robert Baldwin and Christine King Fulton. Her mother was a teacher while her father worked as a consultant.

Baldwin got married to James Fletcher in 2018. He is a British native who is a producer and director, having produced ads for political campaigns. The couple got engaged in 2017 during Baldwin’s birthday while on vacation.

Baldwin said of the engagement; “We were chilling on the beach. We love sunsets. It was simple. I didn’t want a big thing. He did well, all I wanted on my birthday was to be on a surfboard. I got a little bit more than that.”

The couple first met in 2015 at a holiday party while Fletcher was coming through town. She was about to leave for Christmas in Atlanta so she insisted they have dinner right then and there. She soon invited him to New Orleans.

Brooke has a sister known as Wrenn Elam Baldwin and a younger brother whose name is unknown.

Baldwin joined CNN and and ‘Headline News’ (HLN) networks (a ‘CNN’-owned news channel) in 2008 where she contributed to the channel’s award-winning coverage of the 2008 presidential election. She hosts CNN Newsroom with Brooke Baldwin from 3 pm to 4 pm ET on weekdays. he is also the creator and host of CNN’s Digital series “American Woman” which focuses on the stories of trailblazing women who have broken barriers in their respective fields and are now helping other women do the same.

She covered the 2016 Presidential election. In April 2016 she travelled to the Persian Gulf for an exclusive embed opportunity with the US Navy, reporting on the War on Terror. She traveled to Kenya ahead of President Obama’s historic visit and landed an exclusive interview with his half-sister and grandmother in the Obama family ancestral village.

In September 2015 she did an interview with 40 people who have all been touched by gun violence. The interview landed her and the team a Peabody Award finalist nomination.

She has also anchored from the field amid tornado debris in Moore, Oklahoma and from Cleveland, covering the release of three women held in captivity for a decade. Baldwin also joined CNN’s Jake Tapper for special coverage of the historic government shutdown from Capitol Hill.

In 2011 she helped lead CNN’s special coverage of the final space shuttle launch Atlantis from Kennedy Space Center. She was part of the network’s Peabody-award winning team, covering of the oil spill disaster in the Gulf, the collapse of the Upper Big Branch Coal Mine in West Virginia; and the battle over the fate of the nation’s big three automakers.

She did her first hour-long documentary “To Catch a Killer” together with CNN’s Special Investigations Unit which won a Silver World Medal for Best Investigative Report at the New York Festivals International Television & Film Awards 2012.

Prior to joining CNN, she served as a lead reporter for the 10 p.m. newscast for WTTG in Washington, D.C., where she covered the shooting massacres at both Virginia Tech and the West Nickel Mines School, a one-room Amish schoolhouse in southeastern Pennsylvania.

She began her career in journalism at ‘WVIR-TV,’ an ‘NBC’-affiliated TV station based in Virginia in 2001. She later joined WOWK-TV as a morning anchor. While at WOWK, she reported on the Sago Mine collapse and Martha Stewart’s release from federal prison.

Baldwin is expected to release her book ‘Huddle: How Women Unlock Their Collective Power’ in 2021.

According to Google Books review the book explores “the phenomenon of what she calls the “huddle,” when women get together—in politics, Hollywood, activism, the arts, sports, and everyday friendships—to provide each other support, empowerment, inspiration, and the strength to solve problems or enact meaningful change. Whether they are facing adversity (like workplace inequity or a global pandemic) or organizing to make the world a better place, women are a highly potent resource for one another.

Through a mix of journalism and personal narrative, Baldwin takes readers beyond the big headline-making huddles from the last few years (such as the Women’s March, #MeToo, Times Up, and the pink wave in the 2018 midterm elections) and embeds herself in groups of women of all ages, races, religions and socio-economic backgrounds who are banding together in America.”

Brooke is a distant cousin of Alec Baldwin, the American actor who has appeared in movies like Beetlejuice, Working Girl, The Hunt for Red October, and The Departed. Alec comes from a large family fellow entertainers, including actors William, Stephen, and Daniel Baldwin.

In April 2015 Baldwin was critized for an alleged comment “Don’t hire veterans. They’re too damaged to be trusted with authority”. She however never said that but was a loose paraphrase of a passage from her 28 April 2015 interview with Rep. Elijah Cummings of Maryland about the importance of police training:

“We talk about training, we talk about having officers. I was talking to the city councilman last week who was saying, ‘Brooke, these people have to live in the community. There’s a lack of emotional investment.’ And a lot of these young people — and I’ve been talking about them so much. A lot of young people — and I love our nation’s veterans, but some of them are coming back from war, they don’t know the communities, and they’re ready to do battle.”

Her actual comment was about how some veterans might not make good police officers because “some of them are coming back from war [and] they don’t know the communities, and they’re ready to do battle.”

She later issued an apology via Twitter ” I am sorry for what I said earlier about veterans. It was wrong and I apologize to anyone who was hurt by my comments.”

The following morning she clarified her comments and issued an on-air apology.

“I absolutely misspoke. I inartfully chose my words a hundred percent, and I just wish, just speaking to all of you this morning … I wholeheartedly retract what I said. I’ve thought tremendously about this, and to our nation’s veterans — to you, I have the utmost respect for our men and women in uniform, and I wanted you to know that this morning. So to all of you, I owe you a tremendous apology. I am truly sorry.”

Her annual salary is around $4 million

She has an estimated net worth of $10 million.