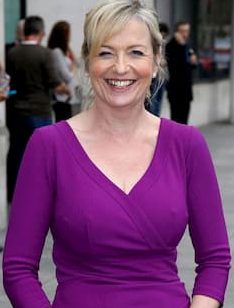 Carol Kirkwood born Carol MacKellaig is a British media personality working as a weather presenter for  BBC and trained by the Met Office. She previously presented short slots on BBC Radio Scotland, BBC Radio 2 and BBC Radio 4 as well  as a training consultant for a management consultancy in Cheshire. She also spent time on a now defunct cable TV channel, Windsor TV, latterly called Wire TV,

Carol attended  Lochaber High School and later  joined Napier College of Commerce and Technology in Edinburgh where she graduated with a Bachelors degree in commerce.

Kirkwood is the daughter of  Malcolm MacKellaig. The family ran a hotel business in Morar. Unfortunately, her dad passed away when she was still young. She hasn’t revealed any information concerning her mother.

She was brought up alongside her seven siblings whose identity hasn’t been revealed.

Carol was previously married to ex-husband Jimmy Kirkwood. The duo exchanged their marriage vows in 1990, but after 18 years of marriage, the pair went their separate ways in 2012. Her relationship status is currently not known.

Kirkwood revealed that she has slimmed down after developing a love of running. She revealed that she does alot of exercise during her mornings at work, as she has to run between the BBC TV and radio studios every 15 minutes to share the weather updates.During an exclusive interview with The Mirror, she explained when her fitness routine began, saying: “I always say my hips look fat or my bottom looks huge. I was never a runner but last year the BBC asked me to do a 5k challenge. I didn’t think I could run, for obvious reasons. I started doing it because it was for the BBC’s Get Inspired campaign. They wanted me to inspire others, so I couldn’t give up.”

After enjoying  the benefits of her new running routine and moved up to regular 10km runs. Due to her busy schedule at work, she said she do about six to eight thousand steps every morning.” She also revealed that she had lost almost a stone and dropped two dress sizes while competing on Strictly Come Dancing in 2015 where she emerged  tenth in the BBC dancing show, and said that her training alongside professional dancer Pasha Kovalev helped her to tone up and get fitter than ever before.

Kirkwood joined the BBC’s secretarial reserve in London and after a series of internal moves, she presented short slots on BBC Radio Scotland, and then BBC Radio 2 and BBC Radio 4. Following her marriage to Jimmy Kirkwood, she left the BBC and subsequently worked in recruitment and then as a training consultant for a management consultancy in Cheshire. In 1992, she spent time on a now defunct cable TV channel, Windsor TV, latterly called Wire TV, along with Sacha Baron Cohen.

Kirkwood rejoined the BBC at the corporation’s Elstree Studios training department in 1993 as a freelance presenter, during which time she also presented a bi-monthly programme Talking Issues for HTV West. In 1996 she joined the new UK operation of The Weather Channel, but after it closed down she underwent training under the guidance of the BBC at the Met Office, before joining BBC News in April 1998 as a weather presenter. She has since appeared regularly across all of BBC Weather’s output on both radio and television, including BBC News, BBC World News, BBC News at Six and the live forecasts as part of the BBC’s coverage of the Wimbledon Tennis Championships.

Carol is the main weather presenter on BBC Breakfast. The programme moved from London to MediaCityUK in Salford in 2013 but Kirkwood stayed in London presenting the weather on Breakfast via video link. She presented the BBC’s The Weather Show and is also a regular contributor and reporter for The One Show. In 2011, Kirkwood co-presented the BBC One series The Great British Weather. She also presented the weather on BBC Radio 2’s The Chris Evans Breakfast Show.She has also appeared as a guest on CBBC’s show Hacker Time.  In 2014, she appeared on BBC One panel show Would I Lie to You?