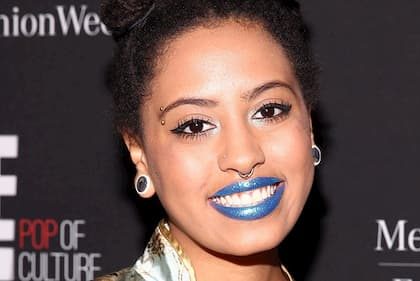 Chiara De Blasio is the daughter of Bill De Blasio,  an American politician serving as the Mayor of New York City. She was arrested on May 30, 2020 while participating in a protest in Manhattan against the killing of George Floyd and other unarmed Black Americans.

In 2016 she graduated from Santa Clara University, a Jesuit institution in Silicon Valley with a diploma in Environmental Studies.

Chiara has not talked about her sexual orientation.

She is of mixed ethnicity as her father belongs to Italian, German, English and French ancestry while her mother belongs to Barbadian and St. Lucian descent.

She is the daughter of Bill De Blasio and Chirlane McCray. Her parents met in 1991 while they were both working for Mayor Dinkins’ administration, de Blasio was an aide to a deputy mayor and McCray was a speechwriter. They got married in 1994.

Her mother is Chirlane McCray an American poet, editor and activist. She chairs the Mayor’s Fund to Advance New York City and leads ThriveNYC.

I 1979 she published an essay in Essence titled “I Am a Lesbian”. In the essay, she discussed her sexuality and expressed gratitude that she came to terms with her preference for women before marrying a man. In 2012 she was asked about the essay to which she said: “In the 1970s, I identified as a lesbian and wrote about it. In 1991, I met the love of my life, married him.”

She has a younger brother known as Dante de Blasio, who is a Yale graduate.

There are no details on where Chiara works or her job description but after graduating college she said she would love to do social work. In 2014 she worked as an unpaid summer intern for City Hall with the office to combat domestic violence.

Her mother posted on Tumblr; “Chiara will be working with the Office to Combat Domestic Violence. She is passionate about working directly with people and this is a great chance for her to get involved with an important issue at the grassroots level. Her duties will focus on the Healthy Relationship Training Academy and working with the Outreach Team to reach women in need. Chiara is excited to begin helping others, especially young women, reclaim their lives. And I’m excited that she’ll be working with Commissioner Rose Pierre-Louis, who has been a vocal advocate for survivors of domestic violence for more than 25 years.”

In 2013 Chiara revealed in a Youtube video that she had been seeing a therapist and underwent outpatient treatment in New York City to help her stop drinking alcohol and smoking pot.

She said that sobriety had helped her as she was actually able to participate in her father’s campaign and was also doing well in school.

“Removing substances from my life; it’s opened so many doors for me. I was actually able to participate in my dad’s campaign, and that was the greatest thing ever. You know, now I’m doing well in school and actually getting to explore things that aren’t just partying.’’

She revealed that throughout her adolescence she suffered “clinical depression” and anxiety. She said drugs didn’t start out as a huge thing for her but it later became a really huge thing.

She added that getting sober was the hardest thing she had ever done but it was so worth it.

Her father, De Blasio praised her for sharing the video; “I just want to say that we are all incredibly proud of Chiara. I think if you look at this video, it speaks to a whole set of challenges that we face in our ­society, that families face all the time and she speaks to it with incredible courage and clarity and with a voice that I think really suggests an incredible wisdom for someone who’s only 19 years old.”

According to reports Chiara was one of the hundreds of people arrested Saturday night while taking part in the weekend’s nationwide protests against the killing of George Floyd and other unarmed Black Americans.

According to the NY PostChiara was taken to custody around 10:30 p.m. after cops declared an unlawful assembly at 12th Street and Broadway in Lower Manhattan. She had allegedly been blocking traffic on Broadway and was arrested after refusing to move. She gave her residence address on East End Avenue also known as Gracie Mansion.