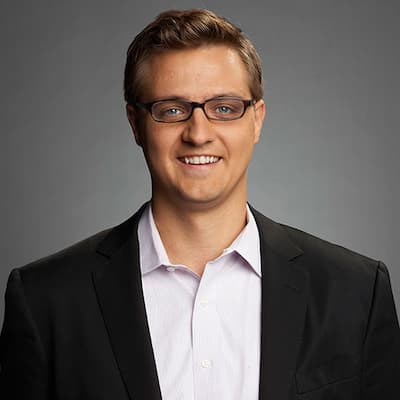 Christopher Loffredo Hayes is an American media personality serving as an anchor for MSNBC. He hosts All In with Chris Hayes and also hosts a weekly MSNBC podcast, Why Is This Happening? He is also an editor at large of The Nation magazine and previously worked as a senior editor at In These Times magazine based in Chicago.

Chris attended New York City’s prestigious Hunter College High School and later joined Brown University, from which he graduated in 2001 with a Bachelor of Arts degree in philosophy.

Chris is the son of Roger Hayes and Geri Hayes. His mother was of Italian descent and his father is of Irish Catholic ancestry. His father moved to New York from Chicago while studying at a Jesuit seminary, and began community organizing in the Bronx. He spent several years leading community organizing at the Community Service Society of New York and now works as an assistant commissioner for the NYC Department of Health. His mother was a school teacher and now works for the NYC Department of Education.

Chris was brought up alongside his two brothers, Lynn Hayes and Luke Hayes who worked for the Barack Obama campaign teams in 2008 and 2018. He also worked on the campaigns of Tiffany Cabán for Queen’s district attorney, Alessandra Biaggi for State Senate, and Jamaal Bowman for Congress, all in New York.

Hayes is married to Kate Shaw, the daughter of veteran Chicago reporter Andy Shaw. She is a Professor of Law and the Co-Director of the Floersheimer Center for Constitutional Democracy also serves as a contributor with ABC News, co-hosts the Supreme Court podcast Strict Scrutiny, and serves as a Public Member of the Administrative Conference of the United States (ACUS). She previously worked in the White House Counsel’s Office as a Special Assistant to the President and Associate Counsel to the President. She also clerked for Justice John Paul Stevens of the U.S. Supreme Court and Judge Richard A. Posner of the U.S. Court of Appeals for the Seventh Circuit.

Chris and his wife has three children together, Ryan Elizabeth, born in November 2011, David Emanuel, born in March 2014, and Anya, born in January 2018.

All In with Chris Hayes MSNBC

On March 14, 2013, MSNBC announced that Hayes would take over the time slot formerly hosted by Ed Schultz, who would move to the weekends. At 34 years old, he became the youngest host of a prime-time show on any of the country’s major cable news channels. The change was made in the hopes that MSNBC can win a wider audience than it did with Schultz. Hayes was said to transition better to The Rachel Maddow Show because he is seen as just as policy-oriented as Maddow. “Chris has done an amazing job creating a franchise on weekend mornings,” said Phil Griffin, the president of MSNBC. “He’s an extraordinary talent and has made a strong connection with our audience.” All In with Chris Hayes, Hayes’s first prime-time show, premiered Monday, April 1, 2013. The show won an Emmy in 2015 and again in 2018.

Prior to joining MSNBC, Chris served as a contributor to the independent weekly newspaper Chicago Reader, where he covered local and national politics. In late 2003, he began a four-year stint at In These Times, a labor-focused monthly magazine based in Chicago, where he was a senior editor. From 2005 to 2006, Hayes was a Schumann Center Writing Fellow at In These Times. From 2006 through 2007, Hayes was a Puffin Foundation Writing Fellow at The Nation Institute, and a contributing writer for The Nation. On November 1, 2007, The Nation named him its Washington, D.C. editor, succeeding David Corn.

Hayes wrote extensively on issues central to the liberal community, including what ails the Democratic Party in the post-9/11 era and how the labor movement is changing. He also reported on progressive activists’ work to resuscitate the “public option” during the 2009–2010 health care fight when many political insiders wrote it off as dead. Hayes was an adjunct professor of English at St. Augustine College in Chicago and a Bernard L. Schwartz fellow at New America Foundation from 2008 to 2010.

On May 27, 2012, Memorial Day Weekend, Hayes made comments on air regarding the use of the word “heroism” as applied to American servicemen killed in action, stating, “I feel uncomfortable about the word because it seems to me that it is so rhetorically proximate to justifications for more war. And I don’t want to obviously desecrate or disrespect the memory of anyone that’s fallen, and obviously there are individual circumstances in which there is genuine, tremendous heroism, you know, hail of gunfire, rescuing fellow soldiers, and things like that. But it seems to me that we marshal this word in a way that is problematic. But maybe I’m wrong about that.”  His remark generated widespread controversy. He initially defended his comment by urging people to listen to what he had actually said. Nonetheless, he apologized on his blog.

Hayes’s first book, Twilight of the Elites: America After Meritocracy was published by Crown Publishing Group in June 2012. A review in The Atlantic called it “provocative” and “thoughtful,” but faulted its policy suggestions as less satisfying. Kirkus Reviews called it “forcefully written” and “provocative.” Aaron Swartz described the book as “compellingly readable, impossibly erudite, and—most stunningly of all—correct.” His second book, A Colony in a Nation, was published by W. W. Norton in March 2017.

He earns an annual salary of $1 million.