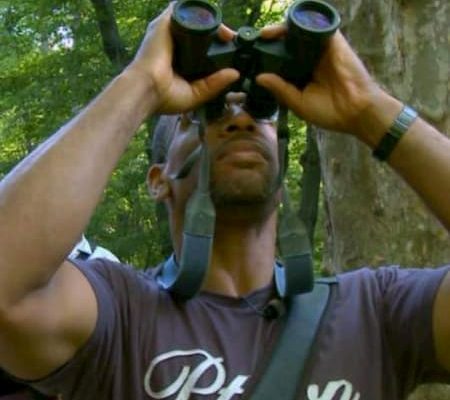 Christian Cooper is an American writer and editor and an avid bird watcher. He is a senior biomedical editor at Health Science Communications. He has written several comic stories for Marvel Comics Presents. He is the man who recorded a viral video in which a woman, Amy Cooper, calls police on him in Central Park after he says he asked her to leash her dog.

Chris has a bachelor’s degree in government from Harvard University. While at the university he was also a president of the Harvard Ornithological Club in the 1980s.

He is the son of the late Francis Hedgeman Cooper, a science teacher and longtime civil rights and community activist. He taught high school biology in Wyandanch in the 1970s and elementary school science at the Harbor Hill School in the Roslyn school district in the 1980s, until he retired in 1995. He also helped lead a chapter of the civil rights organization Congress of Racial Equality on Long Island. He died on March 2, 2019 at the age of 86 due to lung cancer and prostate cancer.

He has a sister known as Melody Cooper.

On May 25, 2020 Christian recorded an encounter with Amy Cooper who called police on him for asking her to put her dog on the leash. Christian was bird watching at a wooded area of Central Park called the Ramble when he saw Amy walking her dog unleashed. He asked her to leash it as it is the rule of the park. Christian said that the dog was “tearing through the plantings.”

The two went back and forth about the dog leash but Christian told Amy that if she does what she wants, he will do what he wants. “Look, if you’re going to do what you want, I’m going to do what I want, but you’re not going to like it.”

Christian said he pulled out dog treats. He said he keeps the dog treats with him to get dog owners to put their dogs on leashes. Christian Cooper said dog owners, in his experience, hate it when a stranger feeds their dog treats and immediately restrain their dogs afterward.

Christian’s sister, Melody posted the video on Twitter with the caption, “Oh, when Karens take a walk with their dogs off leash in the famous Bramble in NY’s Central Park, where it is clearly posted on signs that dogs MUST be leashed at all times, and someone like my brother (an avid birder) politely asks her to put her dog on the leash.”

Oh, when Karens take a walk with their dogs off leash in the famous Bramble in NY’s Central Park, where it is clearly posted on signs that dogs MUST be leashed at all times, and someone like my brother (an avid birder) politely asks her to put her dog on the leash. pic.twitter.com/3YnzuATsDm

She later tweeted that her brother was fine and left the park after Amy leashed her dog.

“My brother & I are so grateful for your concern! He is fine and left to continue birding after she leashed the dog, as he politely requested. I wanted folks to know what happened to make sure it never happens again from her. All she had to do was put her poor dog on the leash.”