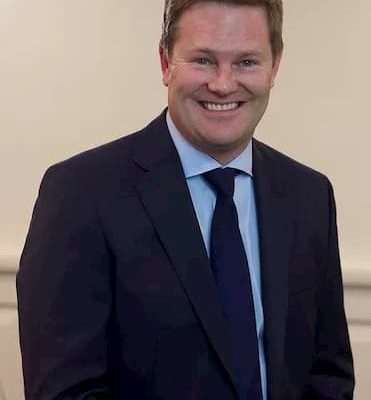 Christian James Fraser is a British media personality working  for BBC News as a  senior news correspondent  based in London and co-presenter of the programme formerly called Beyond 100 Days and previously worked as a trainee reporter before becoming  a full staff correspondent on the Daily Mirror.

Fraser was born on 13 November 1973 in Burnley, Lancashire, England.

His height is unknown

Not much is known about Fraser’s parents. However, his father was an editor whereas his  mother  worked  in a coffee shop but unfortunately she  died after  suffering from a heart disease.

He hasn’t revealed any information concerning his siblings .

Fraser is married to Topaz Amoore, a journalist  who serves as the head of Speechwriting & Editorial Strategy and was a  foreign editor at The Daily Telegraph before being handed assistant editorship.

Fraser and his wife  has two children whose names aren’t revealed .

Christian joined  the BBC in 2000 as an investigative reporter for BBC Radio 5 Live. In 2002 and 2003 he reported on the wars in Afghanistan and Iraq. He spent several months in Baghdad reporting on the transition. In 2004 he embedded with the Welsh Guards in Al Amarah where British forces were battling the insurgency of Muqtada al-Sadr.

In 2005 he was posted to Nairobi, where he reported on the wars in the Democratic Republic of the Congo and South Sudan. In the summer of 2006 he moved to Rome, where he was the BBC’s correspondent for almost two years. In that time he reported on the war in Lebanon and in 2007 in Italy he covered the murder of Meredith Kercher and the trial of Amanda Knox. A year later he moved to Cairo. Fraser was the only British correspondent inside Gaza in 2007 during the Israeli invasion, known as Operation Cast Lead. He spent a week in the Palestinian city of Rafah as the Israelis dismantled the tunnels.

In 2010 Fraser covered the revolution in Egypt for BBC TV and was appointed that year as the BBC’s correspondent in Paris. In 2011 he reported on the war in Libya, first from the rebel held Benghazi and then from Tripoli as the war dragged on. In 2014 he returned to London as the BBC News Channel’s Senior News Correspondent, reporting from Crimea, during the Russian takeover. In 2015/16 he presented live coverage of the unfolding terrorist attacks in France and Belgium. He  co-presented  Beyond 100 Days (#Beyond100Days) with Katty Kay for the BBC News Channel, BBC World News, BBC Four and PBS . He also presents  BBC Breakfast and Radio 4’s PM programme

Prior to working for BBC, Fraser also worked for Trinity Mirror , as a trainee reporter and later a full staff correspondent,  working for the Sunday Mirror and the Daily Mirror .Fraser has won several awards .In 2005, he  collected Gold at the Sony Radio Awards for Five Live’s rolling coverage of the Indian Ocean earthquake and tsunami, which he had presented through the night. At the Prix Bayeux in 2007 he was recognized in the international radio category for his reports on child casualties. In 2006 he was nominated in the News Journalist of the Year category at the Sony Radio Awards.

His salary is unknown

His estimated net worth is not known