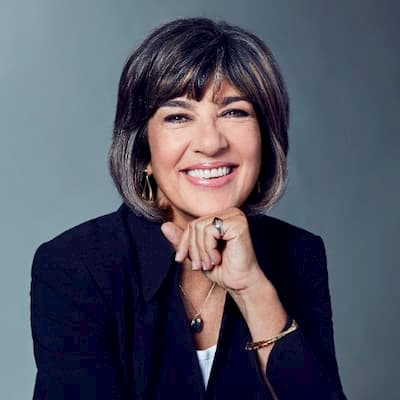 Amanpour was born on 12 January 1958 in Ealing, Middlesex, England.

Christiane attended Holy Cross Convent, an all-girls school  in Chalfont St Peter, Buckinghamshire and then joined  New Hall School, a Roman Catholic school in Chelmsford, Essex. She then  moved to the United States and joined University of Rhode Island where she graduated with a B.A. degree in journalism.

Christiane was brought up alongside her three sisters. One of her sisters Lizzy Amanpour is a  news producer for Channel 4 News, mostly working with the Foreign unit. She was part of the BAFTA-winning team working on the Paris Attacks in November 2015 and also worked as a freelance producer for Al Jazeera English, in the London Broadcast Centre. She produced in-house news stories and worked on News Specials in Afghanistan and Iran.

Christiane was married to James Phillip Rubin , an American former diplomat and journalist who served as U.S. Assistant Secretary of State for Public Affairs in the Clinton Administration from 1997–2000. He is the  Chair, International Policy and Strategy at Ballard Partners, based in Washington DC and  also a Contributing Editor at Politico, writing on U.S. foreign policy and world affairs. The duo got married in 1998 and divorced in 2018.

Amanpour and her ex husband has a son named Darius John Rubin who was born in 2000.

Christiane  is CNN’s chief international anchor of  flagship global affairs program “Amanpour,” which also airs on PBS in the United States. She is based in the network’s London bureau. She joined CNN in 1983 as an entry-level assistant on the international assignment desk in  Atlanta and later became  a reporter at the New York bureau, and later, the network’s leading international correspondent.

From the 1991 Gulf War, the 2003 American-led invasion, Amanpour has documented the bloody violence which has marked Iraq’s recent history. In 2004, she also reported exclusively from the courtroom at the trial of Saddam Hussein, where the former dictator was eventually sentenced to death for crimes against humanity. On the ground during the siege of Sarajevo, she  exposed the brutality of the Bosnian War, reporting on the daily tragedy of life for civilians in the city. She was outspoken, calling out the human rights abuses, massacres and genocide committed against the Bosnian Moslems.

Throughout her time at CNN Amanpour has secured exclusive interviews with global power players. In the wake of the September 11 attacks she was the first international correspondent to interview British Prime Minister Tony Blair, Pakistani president Pervez Musharraf and Afghan President Hamid Karzai. During the height of the Arab Spring she conducted an Emmy-winning interview, the last, with Libya’s former leader ‘Colonel’ Moammar Gadhafi, she was also the last journalist to interview Egypt’s President Hosni Mubarak just before he was deposed.

Amanpour spoke exclusively to Iranian president Hassan Rouhani after his election victory.  She was the first journalist to interview Brazilian President Dilma Rousseff following her country’s shocking defeat in the 2014 World Cup semi-final. She also had the rare opportunity to sit down with Venezuelan President Nicolas Maduro, talking to him about the widespread violent demonstrations in his country.

In January 2014, Amanpour also exclusively broke the news of a dossier of testimony and photographs which alleged to show systematic torture of prisoners by government forces in Syria, welcoming a panel of war crimes experts who attested to the veracity of the shocking allegations. It was with this evidence that she later confronted Russian Prime Minister Dmitry Medvedev — challenging him to justify his government’s support for the Assad regime. She has reported from the aftermath of many humanitarian crises including the devastating 2010 earthquake in Haiti, the 2011 Japanese tsunami, and Hurricane Katrina, where she visited a community center which had been converted to a makeshift morgue for victims of the storm.

Christiane  joined ABC News in 2010 as an anchor of  ABC’s Sunday morning political affairs program “This Week with Christiane Amanpour.” In addition to her anchoring role, she provided international analysis of the important issues of the day on ABC News’ other programs and platforms . She also  anchored prime-time documentaries on international subjects. On 28 February 2011, she interviewed Muammar Gaddafi and his sons Saif al-Islam and Al-Saadi Gaddafi.

Prior to working for CNN and ABD News, Amanpour also works for PBS where she hosts Amanpour & Company, In 2020, she has been hosting the  program from her home in England, due to the Covid-19 global pandemic. Her program continues to be seen on television on PBS at many stations in various areas of the USA, including at least 4 TV stations in the greater Los Angeles region of southern California.

Amanpour is a member of the Council on Foreign Relations, a member of the board of directors of the Committee to Protect Journalists, the Center for Public Integrity, the International Women’s Media Foundation, and the Institute for War and Peace Reporting. Since April 2015 she has served as a UNESCO Goodwill Ambassador for freedom of expression and journalist safety.

She earns an annual salary of $2million

She has an estimated net worth of $12.5 million