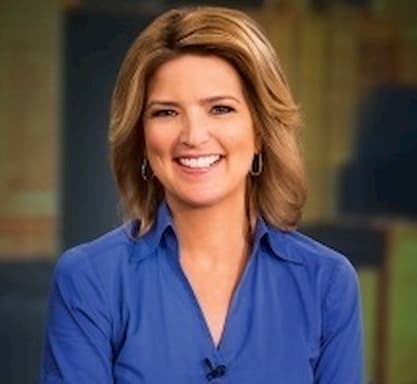 Christine Romans is an American media personality working as a correspondent, anchor and  the Chief Business Correspondent for CNN. She also  anchors Early Start from 4 a.m. to 6 a.m. ET and the weekend business program “Your Money.” and previously worked as an anchor and reporter for Reuters Television.

Romans attended  Pleasant Valley High School before joining  Iowa State University in 1993 where she majored in French in addition to Journalism and Mass Communication and also studied French media and French literature at L’Instut Catholique de Lyon in France.

Christine was raised  in Le Claire by her parents, who came to the US from Norway. Her mother is a housewife while her father is a businessman. It’s not known if she has any siblings.

Christine is married  Ed Tobin a Top News editor at Reuters. He  graduated with a bachelor degree in history and a minor in business from Loyola University in Chicago in 1996, and earned a graduate degree in journalism at New York University . The duo met when she started working for the Reuters News Agency .They began dating in 1996 and after two years became engaged. Their wedding was held in 1999 with only their closest friends and family attending.

In the summer of 2015, rumors began circulating the internet that Christine and Ed were divorcing due to conflicting schedules, which led to them not having enough time to see each other. It is also believed that they wanted to raise their children in different ways which contributed to them drifting away from one another. Although the rumors state that the two might have divorced in 2016, neither Ed nor Christine have commented about the alleged divorce. However, Christine can no longer be seen uploading pictures with her husband onto her social media accounts while she often uploads pictures with her children.

Romans and her husband has three children together, a son named Edward Arthur Tobin and two others whose names aren’t revealed.

Christine  joined CNN Business News in 1999, spending several years reporting from the floor of the New York Stock Exchange. She  is CNN’s Chief Business Correspondent and anchor of Early Start with Dave Briggs weekdays from 4 am to 6 am ET. She won an Emmy award for her work on the series “Exporting America” about globalization and outsourcing American jobs overseas.

Romans is known as CNN’s explainer-in-chief of all things money. She covers business and finance from the perspective of American workers and small business owners, translating what budgets and bailouts and economic data mean for families. Romans brings an award-winning career in business reporting. In 2014, she crossed the country reporting for her series, “Is College Worth it.” In 2010, Romans co-hosted “Madoff: Secrets of a Scandal,” a special hour-long investigative report examining disgraced financier Bernard Madoff and how he perpetrated one of the largest investor frauds ever committed by an individual. In 2009, her special “In God We Trust: Faith & Money in America” explored the intersection of how our religious values govern the way we think about and spend our money. Her series of reports “Living Dangerously” illustrated the risks and precautions for the nearly 30 percent of America’s population living in the path of an Atlantic-coast hurricane. In “Deadly Hospitals,” she examined how hospitals spread dangerous infections and what patients can do to protect themselves.

Romans was the anchor of CNNfn’s Street Sweep tracking the market’s boom through the late 1990s to tragedy of Sept. 11 attacks. She anchored the first democratic elections in Iraq’s history from CNN Center in Atlanta. She has covered four hurricanes and four presidential elections, and was part of the coverage teams that earned CNN a George Foster Peabody award for its Hurricane Katrina coverage and an Alfred I. duPont Award for its coverage of the tsunami disaster in Southeast Asia. Prior to joining CNN, she previously worked for a group of newspapers in the Midwest and was a reporter and anchor for Reuters Television.