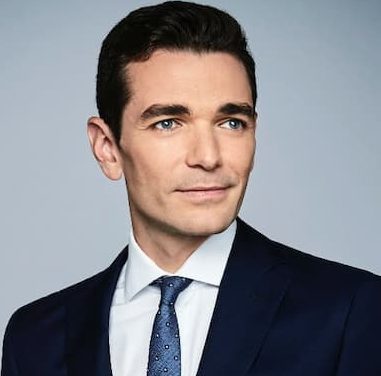 Cyril Vanier is a media personality serving as an anchor for CNN International based in the network’s London bureau. He co-anchors ‘Your World Today with Isa Soares and Cyril Vanier.’ He previously served as executive producer, anchor, and international correspondent on France 24.

He stands at a height of 5 feet 9 inches tall.

He has dual nationality (France, St. Kitts and Nevis)

Vanier is the son of Christopher Ralph Vanier. The name of his mother is unknown but she has since passed away.

His father is an author of ‘Caribbean Chemistry’. He began writing full time in 2001. In 1959 the USIA awarded him the Caribbean-wide sesquicentennial Lincoln Essay Prize and in 1960 he won the Leeward Islands Scholarship. He previously worked as an engineer and IT specialist for 30 years, calculating the dynamics of trains, the feasibility of thermal energy from the sea, and the reliability of business computer systems.

Cyril is married to Linda Vanier, there is no information on when or where they met or when they got married.

Vanier joined CNN in 2016 where he serves as CNN International based in the network’s London bureau. He is also the co-anchor of Your World Today with Isa Soares and Cyril Vanier (weekdays 11pm BST/ 12am CET).

During his tenure at CNN he has anchored a number of major breaking news events for CNN International and CNN/US including the Russia investigation; airstrikes in Syria; the terror attack in Trèbes, France; multiple missile tests in North Korea; and the death of Fidel Castro.

He has also reported on location for many stories including Hurricane Irma in Caribbean, election of President Emmanuel Macron, Oxfam prostitution scandal in Haiti.

Cyril joined France 24 in 2006 where he served as executive producer, anchor, and international correspondent. He wrote and presented France 24’s flagship shows; The News, The F24 Interview and The Debate.

During his tenure he reported on major international stories including the terror attacks in Europe and Africa to conflicts in the Middle East. He also reported on the U.S. presidential campaigns and elections in 2008 and 2012, 2012 French presidential election, Arab uprisings in 2011, the War in Afghanistan and war crimes trial of Radovan Karadzic at The Hague.

His coverage of the Libyan uprising was nominated for several awards including the Albert Londres award, Bayeux War Correspondents Award and the FIGRA award in 2011.

His actual salary is unknown but it is estimated to range between $200k-$300k annually.