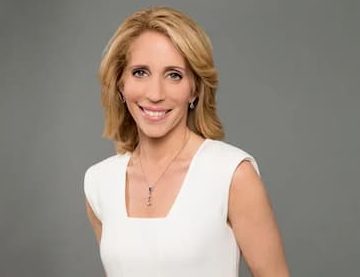 Dana Bash is an American media personality serving as CNN chief political correspondent based in Washington, D.C., serving as the network’s lead reporter covering campaigns and Congress. In 2019 she won Sol Taishoff Award for Excellence in Broadcast Journalism.

Dana is the daughter of Stu Schwartz and Frances Weinman Schwartz. Her mother is an author while her father is a former television news producer and senior producer at ABC News for 41 years he retired in 2009 as senior Broadcast Producer of ABC News. He serves as an adjunct professor of broadcasting at Montclair State University in Montclair, New Jersey, a student advisor at the School of Media and Public Affairs at George Washington University in Washington, D.C., and as a lecturer in China on American television news sponsored by the University of Missouri School of Journalism.

Dana was married to Jeremy Bash between 1998 – 2007. Jeremy is an American lawyer who served as the Chief Justice of Staff at the US Department of Defence. He has also worked with the Central Intelligence under President Barack Obama.

In 2008 Dana got married to John King but they divorced in 2012.  John is also a news anchor serving as CNN’s chief national correspondent, based in Washington, DC, he also anchors CNN’s roundtable political discussion program Inside Politics. He previously hosted John King, USA, which appeared weeknights at 7pm/ET on CNN before being canceled.

Dana has a son with her ex-husband John King known as Jonah Frank King born on July 29, 2011.

The couple first met in 2013 and were introduced by a mutual friend. At the time Garrett was out shopping with entrepreneur Susanna Quinn, who was also in Below The Beltway (2010) with Garrett, when he asked if she knew any single women.

Happy birthday to this guy – who makes me smile. @spencergarrett1

Dana serves as CNN’s chief political correspondent based in Washington, D.C., serving as the network’s lead reporter covering campaigns and Congress. She regularly serves as a moderator for CNN’s political town hall specials and debates, including for CNN’s first debate of the 2020 election cycle in Detroit.

During CNN’s 2016 presidential primary debates she played a key role serving as a questioner in six of the network’s seven primetime primary debates on both sides of the aisle.

She also serves as a co-anchor on set in the CNN Election Center for all election night specials and is the primary fill-in anchor for Jake Tapper on CNN’s premier political show, State of the Union.

She is also instrumental to the network’s Capitol Hill coverage. In 2015, she broke news on live television that House Majority Leader Kevin McCarthy would not be running for Speaker of the House and also conducted Speaker John Boehner’s final interview on his last day in office. She also served as the lead correspondent covering former Secretary of State Hillary Clinton’s 11-hour testimony before the House Select Committee on Benghazi.

She was part of the duo that won the Joan S. Barone Award in 2012 for excellence in congressional reporting on a STOCK Act loophole that could have allowed family members of lawmakers to profit from insider information on trades. She earned the prestigious Everett McKinley Dirksen for Distinguished Reporting of Congress Award from the National Press Foundation an unprecedented three times, most recently for her 2012 reporting on a STOCK Act loophole. Her reporting resulted in Congress passing legislation to close the loophole in August.

Prior to covering the congress, she served as a CNN’s White House correspondent from the nation’s capital and from various locations around the world during President George W. Bush’s administration. She reported on major stories such as Hurricane Katrina, the CIA leak investigation, and the capture of Saddam Hussein. She was instrumental in CNN’s 2006 mid-term election coverage and the 2004 presidential campaign.

Before her on-air position with the White House unit, she was the Capitol Hill producer for CNN, where she had primary editorial and newsgathering responsibility for the network’s coverage of the U.S. Senate. She covered stories such as the Republican dominance in the 2002 elections, the war on terrorism, campaign finance reform, the Florida recount and the impeachment of former President Bill Clinton.

In 2002, she broke the story of the government’s secret intercepts of Al Qaeda translations on Sept. 10, 2001, for which she received her first Everett McKinley Dirksen for Distinguished Reporting of Congress Award from the National Press Foundation.

She joined CNN as an editor in CNN’s Washington bureau and also served as a producer on several of the network’s public affairs shows, including Late Edition with Frank Sesno, Evans & Novak and Inside Politics Weekend with Wolf Blitzer, producing long-form live interviews with heads of state, lawmakers and other newsmakers.

Happy big birthday to the original badass woman in my life – the smartest person I’ve ever known but also the strongest. That’s been more clear than ever over the last few months. Happy happy birthday. We love you mom!