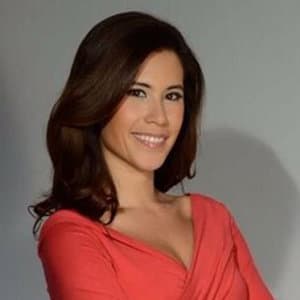 Deirdre Bosa is a Canadian-Taiwanese media personality serving as a technology correspondent for CNBC based at the network’s San Francisco bureau. She previously worked as an anchor and reporter for CCTV News International based in Beijing, as well as a contributor to Fox Business News.

Bosa was born in San Francisco United States of America but her exact date, month, and year of birth are not available.

Bosa graduated from McGill University in Montreal, Canada, and also completed her Masters in Journalism program from the University of Hong Kong.

Deirdre is married to Darryl Bosa a businessman and the founder of CMPNY co-work, re-established in August 2015. He graduated with a bachelor’s degree in Finance from the University of British Columbia in the year 2002. He also studied a master of business administration in international business trade commerce from TRIUM Global Executive MBA. The duo exchanged their marriage vows on 19th August 2014 in a ceremony attended by close family members and friends. During their wedding, a professional photographer, Tamiz was seen capturing their beautiful event. TheY also had a joint Instagram account that had the names of the couple on bio but the account has remained inactive since October 2014.

Bosa and her husband are proud parents of a son Hiro Bosa . She posted a picture of her baby, with her in the CNBC newsroom, on 18 December 2015.

Deirdre re-joined CNBC in October 2016 as a technology reporter based at the network’s San Francisco bureau, [email protected] Previously, she was a frequent presence on air and online as a CNBC contributor, reporting out of Vancouver, Canada. Bosa joined CNBC in 2012 covering the markets and economies of London and Singapore. She has co-anchored morning programs including “Squawk Box Asia,” “Squawk Box Europe,” and “Worldwide Exchange.”

Bosa has reported from events including the World Economic Forum in Davos and CeBIT in Germany and interviewed some of the world’s key business figures including Richard Branson, James Gorman, Arianna Huffington, Bob Diamond and Bill McDermott. Prior to CNBC, Bosa was an anchor and reporter for CCTV News International based in Beijing, as well as a contributor to Fox Business News. Deirdre also worked for several multinational corporations including Barrick Gold in Toronto and Rio Tinto in Shanghai.