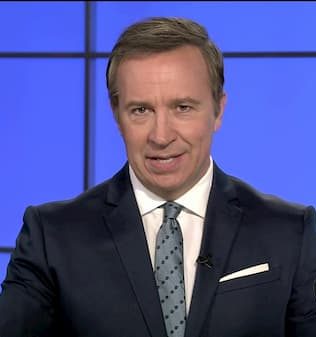 Dennis House is an Emmy award-winning journalist who served as The Eyewitness News anchor and moderator for “Face the State” Sunday news and politics program on WFSB Channel 3 until he resigned in September 2020.  In 2018 he was inducted into the Silver Circle of the New England Chapter of Television Arts and Sciences for his years of service to the viewers of Connecticut.

Dennis was born on September 11, 1964 in Norwood, Massachusetts, USA.

Dennis is married to Kara Sundlun. The couple got married on August 1, 2001 at a private wedding held at St. Augustin Church in Newport, R.I. Kara is a two-time Emmy-award winning journalist serving as the co-host of Better Connecticut with Scot Haney at 3 p.m. on Channel 3. She also anchors Eyewitness News at Noon.

House together with his wife has two children together, a daughter known as  Helena born on February 18, 2007 and a son known as Julian born on September 2, 2009.

During his tenure at the station, he helped over the Sept. 11, 2001, terrorist attacks, the O.J. Simpson trial, University of Connecticut basketball championships

House began his career in journalism at WPRI-TV in Providence, R.I., and then moved on to become the assignment manager at WMUR-TV in Manchester, N.H. He later joined WREX-TV in Rockford, Ill. serving as a weekend anchor. He later became a weekend sports anchor and news reporter at WWMT-TV in Grand Rapids, Michigan.

On September 1, 2020 Dennis announced on his social media that he had left Channel 3. In a statement he said;

“Words cannot express how grateful I am to have served the great state of Connecticut as a journalist for 28 years at WFSB. The station has meant so much more to me than just a job. I’ve grown up here. The people who work here are my family. I met my wife here, became a father here and suffered the tremendous loss of Denise D’Ascenzo here. The special report that night was the most challenging moment of my career. Being half of the most successful and longest running anchor team in Connecticut television history was a great honor. What’s next? When nothing is certain anything is possible. I just hope my next chapter is as rewarding as this past one.”

BREAKING: It’s time for a new beginning! I have left Channel 3 @WFSBnews after an historic run and I have the people of Connecticut to thank. I am deeply grateful. Read more here: https://t.co/oLd1u07f6s

The station through its General Manager, Dana Neves also released a statement thanking Dennis for his service and wishing him luck for his next endeavors.

“On behalf of all of us at WFSB, we want to thank Dennis for his decades of service to the people of Connecticut and wish him luck in his future endeavors. Dennis has a passion for news and politics, telling thousands of wonderful stories from here in Connecticut and around the world over the years.”

Why is Dennis House Leaving WFSB

Dennis did not reveal his reason for leaving in his leaving statement he said, “when nothing is certain anything is possible. I just hope my next chapter is as rewarding as this past one.”

Where Is Dennis House Going

House did not reveal where he was going or what his next move was after leaving channel 3.