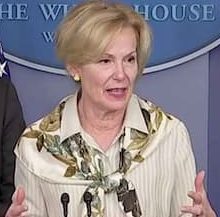 Deborah was born on April 4, 1956 in Pennsylvania, United States.

Deborah attended Houghton College where she majored in chemistry and received her medical degree from Penn State University’s Hershey School of Medicine.

It is not clear if Birx is Jewish or not.

Dr. Deborah was born to Donald Birx and Adele Sparks Birx. Her father is a mathematician and electrical engineer while her mother is a nursing instructor.

Deborah is married but has managed to keep her personal life private. The New York Times insinuates that she is married as they reference an incidence that happened to her in 1983, as she was going to labor she refused a blood transfusion when she began to bleed out, she allegedly yelled to her husband “Do not let them give me blood!” before she lost consciousness. This however helped save her life as the blood was contaminated with HIV.

Deborah is married to Paige Reffe. He is a partner at Law office of Paige e Reffe in Washington D.C. Metro Area. He serves on the Board of Directors of the US Committee to Expand NATO.

He served as the Deputy Assistant & Director of Advance for Bill Clinton. He was responsible for the execution of the President and First Lady’s trips.

Deborah is a mother to two children. In March 2020, during a coronavirus press conference while making a conscious effort to call upon an entire generation for help in spreading the message of “social distancing” she revealed that she was a mother of two daughters.

“I want to speak particularly to our largest generations now, our millennials. I am the mom of two wonderful millennial young women who are bright and hardworking, and I will tell you what I told to them: They are the core group that will stop this virus. They are the group that communicates successfully independent of picking up a phone. They intuitively know how to contact each [other] without being in large social gatherings.”

Birx is a former Army Veteran, having risen to the rank of Colonel in the US Army according to her LinkedIn page. She joined the US Army in 1980 and rose to the rank of Colonel.  In 1985 she joined the Department of Defense (DoD) as a military-trained clinician in immunology, focusing on HIV/AIDS vaccine research. From 1985-1989, she served as an Assistant Chief of the Hospital Immunology Service at Walter Reed Army Medical Center. From 1996 to 2005 she served as the Director of the U.S. Military HIV Research Program (USMHRP) at the Walter Reed Army Institute of Research. She rose to the rank of Colonel, bringing together the Navy, Army, and Air Force in a new model of cooperation – increasing the efficiency and effectiveness of the U.S. Military’s HIV/AIDS efforts through inter- and intra-agency collaboration.

She led the development of the Thai vaccine trial which became the first clinical HIV/AIDS research study to show the potential that a vaccine could protect against HIV. This together with her leadership, and management skills earned her two prestigious U.S. Meritorious Service Medals and the Legion of Merit Award.

In 2014 former President Obama nominated Deborah as the State Department’s U.S. Global AIDS Coordinator and the U.S. Special Representative for Global Health Diplomacy. She has been in charge of the President’s Emergency Plan for AIDS Relief and America’s participation in the Global Fund to Fight AIDS, Tuberculosis and Malaria.

She was also director of the division for Global HIV/AIDS at the Centers for Disease Control and Prevention from 2005 to 2014.

She was behind the RV 144 vaccine trial, or the Thai trial, which “provided the first supporting evidence of any vaccine’s potential effectiveness in preventing HIV infection,” according to the State Department.

In late February, Deborah was appointed by Vice President Mike Pence to the coronavirus task force to serve as the Coronavirus response coordinator.

Dr. Deborah seems to have an affinity for silk scarfs. Spectator USA’s Marlo Safi wrote, “Since we’re all working from home and have been wearing the same rotation of sweatpants or leggings for the past week or so, it’s relieving to see someone front-and-center not dressed like a DMV employee or middle management at a think tank. When this is all over, and I emerge from my home like a cavewoman after martial law has been lifted, I’ll at least be taking some style pointers from Deborah Birx.

Deborah’s salary as the White House coronavirus response coordinator is not known.

Deborah’s net worth is under review.