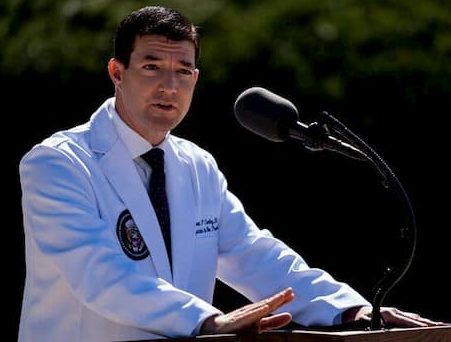 Dr. Sean Conley is an American osteopathic physician and Navy Officer who became the official doctor to the president in May 2018. He oversees the president’s health as leader of the White House Medical Unit.

How Old Is Sean Conley

Sean was born in April 1980 in Doylestown, Pennsylvania.

Sean is married to Kristin Conley, who is also a physician. She graduated from the Philadelphia College Of Osteopathic Medicine in 2006 and completed residency at the Naval Medical Center in Portsmouth, but her specialty was internal medicine.

In 2016 she was honored as the Working Mother of the Year by Working Mother magazine. She said she joined the Navy for the love of her husband and her country. She said after giving birth to their sons it became impossible for the children to have two parents on active duty. She decided to join Bon Secours, which she says allows her to be active in the community “with my kids and to advance my career from a clinical standpoint.”

Conley together with his wife has three children together, Padraig, Garrett and Emily.

Sean is a certified doctor of osteopathic medicine. D.O.s, differ from traditional medical doctors in that they are trained to look at the body and its care holistically rather than prescribing medicine for specific symptoms or illnesses.

According to the NYTimes, Osteopathic doctors are required to complete additional coursework to understand how the body’s bones, muscles and nerves affect overall functioning and health and sometimes use manual techniques for diagnosis and treatment, such as applying pressure to or stretching out joints and muscles. They can also prescribe medicine.

Sean specialized in emergency medicine for his residency program at the Naval Medical Center in Portsmouth, Virginia.

In 2014 he served as an emergency physician with the International Security Assistance Force at Kandahar International Airport outside the city of Kandahar, Afghanistan. He was assigned to NATO Role 3 MMU, and was appointed head of the trauma department.

In 2014 the uint won a commendation from the Romanian Land Forces for saving the life of a Romanian soldier injured by an improvised explosive device. He later served as the research director at Portsmouth Navy Department of Emergency Medicine.

Dr. Sean is President Trump’s doctor. He took the role of White House physician in 2018 after Dr. Ronny L. Jackson was nominated to be secretary of the Department of Veterans Affairs. He is one of the doctors who are treating Trump after he was diagnosed with coronavirus.

After Trump revealed in a tweet that he had been diagnosed with the virus together with the first lady. Dr Sean released an official statement confirming the news.

“The president and first lady are both well at this time, and they plan to remain at home within the White House during their convalescence.” He added that the president was expected to “continue carrying out his duties without disruption while recovering.”

Trump physician Dr. Sean Conley on timeline: “Not going to go into that — as far as his care, it’s irrelevant.” pic.twitter.com/VrWQKdJTDW

In May 2020 Dr. Conley revealed that President Trump had started taking hydroxychloroquine, an anti-malaria drug, while under his care as a precautionary measure to protect him from the coronavirus. The FDA at the time had cautioned the drug should only be used in controlled clinical trials due to the risk of serious side effects such as heart rhythm problems. Health officials later concluded hydroxychloroquine was not effective against COVID-19.

In a White House memo Conley he said he and the president had “concluded the potential benefit from treatment outweighed the relative risks.”

After Trump was diagnosed with the coronavirus in October, Conley told reporters that Mr. Trump was not taking hydroxychloroquine. “We discussed it. He asked about it. He’s not on it now.”

He is estimated to earn an annual salary of $1 million.

He has an estimated net worth of $2.5 million.