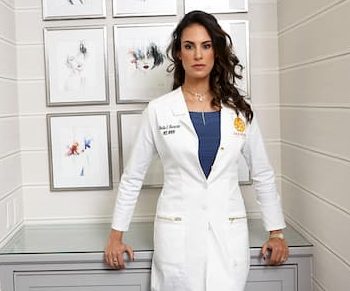 Dr. Sheila Nazarian is an award-winning plastic surgeon based in Beverly Hills, 90210 and founder of Nazarian Plastic Surgery. She also serves as Assistant Professor in the Division of Plastic Surgery at the University of Southern California.

She is an Iranian and American national. She was born in Iran and at the age of 7 she moved to

She has a BA in economics with a premedical concentration from Columbia University in New York. She later matriculated into Yeshiva University’s Albert Einstein College of Medicine. She has a Masters in Medical Management degree from the Marshall School of Business at USC.

Sheila doesn’t say much about her parents but she features her father in her social media accounts. He is a pathologist who was featured in the New England Journal of Medicine for discovering “pneumocystis carinii in malnutrition orphan children in Iran.”

Missing the daddy hugs right now ❤ . . . These are stressful, introspective, and lonely times. Just when some semblence of normalcy was coming back… Chaos, consequence, protest, and pandemic have made an unprecidented concoction. Learning, listening, supporting and praying with all of you… but can’t help to feel anxiety and uncertainty as well. How are you all doing? How are you coping? What are you changing and how are you growing moving forward? 🙏 . . . #SadTimes #PledgeToBeBetter #Kindness #Humanity #Growth #Hope #SheilaNazarian #Feelings #Hugs #Daddy #Oneness #Love

She is married to Dr. Fardad Mobin, a neurosurgeon specializing in spinal and cranial procedures. The couple met in 2005 and got engaged three months after they began dating.

Dr. Fardad attended the University of California, Rensselaer Polytechnic Institute, UC Davis School of Medicine, and UCLA Medical Center before becoming a clinical instructor of neurosurgery at UCLA. In August 2011 he was appointed as the co-director of the Spine Institute at the Los Angeles-based St.Vincent Medical Center.

According to a Facebook post by Sheila, Fardad came to the USA at the age of 13 and finished college with a masters in physics in 3 years. He was the second youngest to graduate from his medical school class with honors.

One year ago… if you would have told me where we would be today, I would never have believed you. Humbling to say the very least. A wake up call for sure. It took a pandemic for me to slow down. To look inward. To reevaluate my goals. I have already made it. Already succeeded. I have nothing to prove. No one to impress. It’s time to re-prioritize. Re-evaluate. Renew ourselves and our surroundings. Wow. How profound this time has been for me. I can breathe… . . . #PledgeToBeBetter #ForeverChanged #Think #Breathe #SlowDown #MeditateInYourOwnWay #Renew #Beautiful #Love #SheilaNazarian #NazarianLifestyle

She is a mother of three; two daughters and a son.

Dr. Sheila is an award-winning plastic surgeon who served as the Division of Plastic and Reconstructive Surgery’s Clinical Research Fellow for two years where she published multiple journals. She is also the founder of Nazarian Plastic Surgery in Beverly Hills. she is trained in cosmetic surgery, plastic surgery, reconstructive surgery, hand and burns surgery. She specializes in CoolSculpting®, Fat Freezing, Tummy Tuck, Liposuction, Breast Augmentation(Implants), Kybella, BodyTite, Laser Tattoo Removal, Dermal fillers among others.

Sheila hosts Netflix show ‘Skin Decision: Before and After” alongside her assistant Nurse Jamie. In the show, they help their clients modify themselves so as to look like their most “optimized” versions. The show focuses on improving appearances both cosmetically as well as surgically.

She also made other television appearances as she starred as a guest doctor on the likes of The Real Housewives of Beverly Hills, Revenge Body with Khloe Kardashian, Basketball Wives, as well as E! News.

She runs The Skin Spot, an Instagram account aimed at disseminating crucial pieces of information on the best and most reliable beauty products out there.

Are you struggling with acne? 🤔 If you’ve been watching @skindecisionnetflix you’ve seen the emotional toll that acne can take and how big of a difference clearing it can make in your confidence. ⁣ ⁣ Although we always recommend combining skincare with services at @spa26.official (we have the Gucci of all non-invasive procedures, FYI), here are some tips to help you clear your skin from home! 🤍

Sheila’s actual net worth is unknown. Her salary is also unknown but an average Beverly Hills-based plastic surgeon earns between $375,704 and $527,277 according to salary.com.