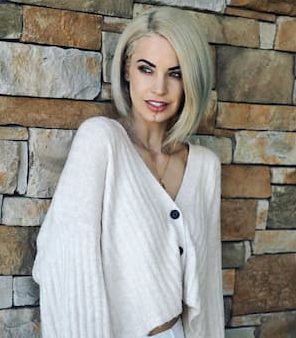 Elly Brown born Elizabeth Anna Brown is a former American actress, singer and television personality. She is a cancer survivor and the fiance of magician Rick Lax.

Elly was born on January 30, 1978 in Montgomery, Pennsylvania.

Elly is the daughter of Mike and Carrie Brown. Her father served in the U.S. Air Force. He died in 2019.

Elly has three siblings Michael, Larissa, and Rob. Michael served in the military and her sister Larissa is a theater actor.

Elly Brown is engaged to Rick Lax, an American magician and author. He created TV show Wizard Wars, which aired on the Syfy network in 2014. He competed on the CW’s Penn & Teller: Fool Us in 2015 and was the only contestant to fool Penn & Teller during the episode where he performed an original card trick called Binary Code. He releases videos on Facebook.

My Valentine and my Bae 😆🐶❤️🍫 #happyvalentinesday #myvalentine #luv 💕🎉🙌 @instaricklax

Elly began her career modeling and singing. She performed with The Sound Collage, a Vegas-based a cappella group and vintage-themed touring group The Beverly Belles. She also performed with Jubilee showgirls troupe. She was also an actress who appeared in indie films like Alien Domicile and appeared in episode 1 of Hidden Vault Films’ fan film production of Rise of the Catwoman, for which Elly won a Maverick Movie Award for Best Actress.

Brown is a cancer survivor. She had had a white patch on her tongue since high school but it was until she moved to Vegas that her dentist advised she get her tongue checked every two years. In 2017 she was diagnosed with oral cancer after her dentist saw a lump. She underwent surgery to remove the lump from the back of her tongue.

“My oral surgeon said ‘Ooooh. I don’t like the look of that’. Not something you want to hear. He tested it, and sure enough, it was oral cancer on the back of my tongue. They did a surgery to remove the lump, without any further treatment. It gave me a very, very slight speech impediment, but I was able to go back to work about two months later.”

In the autumn of 2017 her pain became unbearable. She got checked but her scan was clear and her ENT specialist suggested she take pain medication. Three months later after a biopsy, she discovered her cancer has recurred.

“I went back to him and demanded a biopsy, and sure enough, the cancer had returned aggressively-stage three squamous cell carcinoma.”

She underwent surgery at UCLA medical where half of her tongue was removed. the doctors built a flap from muscle and skin taken from her which gave her ‘new tongue’ it’s own blood supply.

“He performed a hemi-glossectomy (removal of half of the tongue), and replaced the bit of jaw bone that was in the margins of the tumour with bone from my right leg. In order to do all of this work, they left scars on my neck (for the trache I had for a week), my belly (the feeding tube), my leg (donor site and skin graft) and a big, long guillotine scar from the center of my lower lip running down around my jaw to my ear.”

The doctors removed all of her lymph nodes on the left side even though they tested negative for cancer just as a precaution.

She said that the scars will remain forever. “The scars I will have for life. They pulled four of my back-left teeth in order to reach the tumor, so I can only chew on my right side–which further inhibits my ability to eat and gain weight.”

She said she was grateful for the surgery as it saved her life. She added that the doctors don’t tell people every aspect of what is going to happen as many would opt-out.

“The doctors rarely tell people every aspect of what is going to happen to them on one singular day, because they can’t—if they told people everything at once, many would be so upset they’d simply avoid the surgery. But that surgery saved my life. I would have been dead by Christmas of 2018 without it.

I’m so grateful for my doctors and the way that they helped me through it at a pace I could handle. The physical changes have changed the nature of my work exponentially. My voice lowered a bit and lost a lot of stamina after radiation, something that is unlikely to get better, even over time.”

She also added that her speech was affected. “Also, I have a very noticeable speech impediment – my diction simply isn’t mainstream enough to continue in voiceover work and corporate on-camera hosting. That work requires perfect diction, because those microphones pick up everything. I like to say ‘I’m too special for those jobs now’, haha. And though I’m joking in a way, it’s absolutely true.”

In 2019 Elly was diagnosed with breast cancer. In her Youtube channel, she revealed she had ductal carcinoma in situ- meaning the cancer is trapped in a duct.

After my recent diagnosis with the same DCIS breast cancer that my mom conquered, I had every reason to believe I would overcome. She is my inspiration, and taught me everything I know about courage, strength, family and faith. #Ad That’s why I’m so grateful to team up with @JCPenney in celebration of the courageous survivors across the country during Breast Cancer Awareness Month. From now until October 31st, $2 from each BCAM tee shirt sold will be contributed to the American Cancer Society! Who inspires you the way my momma inspires me? Tell me in the comments, and head to JCPenney to grab a tee shirt and celebrate strength with us. Once you have your shirt, you can enter my contest to win a $50 JCPenney gift card! Here’s how: 1. Make sure you are subscribed to my Instagram account. 2. Comment on this photo, tag the person who inspires you and tell me why they inspire you. 3. Post a photo of you wearing your shirt. Tag me and tag @JCPenney, using the hashtag #AllAtJCP. One lucky subscriber will win a $50 JCPenney gift card from me. The winner will be chosen on Halloween! Thank you JCPenney, for everything you do for breast cancer awareness! #AllAtJCP 😄 💪🙏🏻 #breastcancerawarenessmonth #breastcancerawareness #breastcancerawarenessmonth🎀 #breastcancerawareness🎀 #breastcancercare #breastcancerfighter #bcam #mastectomy #lumpectomy #warriors #pinkribbon #breastcancerresearch

Here’s a smile from me to you. How are you? Are you ok? Gotta check on you guys and tell you I’m sending you hugs and prayers 💕💕💕 Honestly, sometimes I feel weird even posting any pictures at all during these turbulent times. Seems so silly to think about photographs, having fun, or marking any occasions when so many are suffering. On the other hand, I know it’s important to make our own happiness wherever we go, with whatever circumstances are surrounding us. Pass a smile on today. Wherever you are, whatever you are doing, may you find a new season of contentment and meaning. 🙏🏻💕🙏🏻💕#survivor #survivorstories #2020goals #contentment #loveandjoy #oralcancer #headandneckcancer #oralcancersurvivorstories #tonguecancer