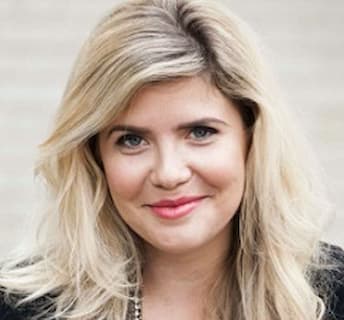 Emma Barnett is a British media personality serving as the main presenter of Woman’s Hour on BBC Radio 4  and she is one of the regular presenters on BBC Two’s Newsnight. She previously worked at the Daily Telegraph as a digital media editor and later the women’s editor and she also co-presented the live discussion programme After the News on ITV.

Emma was born on 5 February 1985 in Manchester, United Kingdom.

Barnett attended Manchester High School for Girls, an independent school and in 2006, she graduated with a degree in History and Politics from the University of Nottingham. She also took a postgraduate course in journalism at the Cardiff School of Journalism, Media and Cultural Studies.

Emma is the daughter of Ian Barnet and Michelle Barnett. Her father was a local businessman who worked in the commercial property the majority of his career, and her mother was a housewife. An only child, Emma’s family are Orthodox Jews although she has said in the past that she does not actively practice. During Barnett’s teenage years, her father ran brothels in the Greater Manchester area. The family home had been used for publicity shoots of some of the women and the recording of sex films. In 2008 he was sentenced to imprisonment for keeping brothels and controlling the prostitution of a trafficked woman and her mother also received a suspended sentence for money laundering related to income from the brothels.

Barnett met her husband at university and the pair exchanged their marriage vows in 2012. However, she has not revealed any further information regarding him.

Emma and her husband have a son together but not much is known about him. During a question and answer interview, she was asked what would she would change if she were to edit her life and she responded,
“Not being able to have a baby for two and a half years. Lots of people say it made me a better person; I think it made me worse. You go to a very dark place with your friends because they are having kids, and you want to be happy for them but you’re not.”

Emma told her followers on Instagram that she and her husband struggled to conceive because of her endometriosis. She also revealed that she underwent unsuccessful rounds of IVF. She wrote in October 2019: ‘Because of my diagnosis we qualified for IVF on the NHS, and were actively prescribed it after we again failed to fall pregnant naturally within six months of my operation (the time with the highest odds of success). The child I didn’t ever believe would be ours was born 18 months ago. I still can’t quite believe I am a mother.’

Barnett revealed that she struggled for 21 years before she was finally diagnosed with endometriosis. In an interview she narrated how she battled with painful periods every month, only to be advised to try strong painkillers and various contraceptive pills. She learnt through a mate who happened to be an obstetrician

“. As I sat slumped to one side during a breakfast out one day – she inquired why I wasn’t sitting upright. I told her I never can on day one of my period, how my bone-deep pain feels like it’s dragging me slowly to the floor. She then gently mentioned a word I am ashamed I couldn’t spell, let alone pronounce: endometriosis.” After a laparoscopy, the diagnosis was finally made.

Prior to joining BBC, she previously worked at Media Week in 2007 and then joined The Daily Telegraph in 2009,  first as its digital media editor and later the women’s editor. Barnett launched The Telegraph’s digital section, “Wonder Women” in October 2012 with contributors such as Cathy Newman of Channel 4 News. She also became chair of the UJIA Jewish media network and of the UJIA Skirt Network, a networking group for Jewish women.

During December 2019, Barnett was widely criticized for her line of questioning towards Angela Rayner in an episode of the BBC’s Question Time, where she referred to Labour as the “party of the big state” and asked if they would “nationalize sausages”.

On 6 January 2021, it was widely reported that, in her third Woman’s Hour programme, Barnett was involved in an incident when she was overheard by guests after inadvertently leaving her microphone on. The conversation overheard was a discussion with her producers, concerning alleged anti-Semitic comments made by Kelechi Okafor, one of the show guests, who had been booked to talk about the legacy of the #MeToo movement and had defended similar comments made by Reggie Yates in 2017 about record company managers.

In February 2021, one hundred public figures signed an open letter to the BBC, organized by Yassmin Abdel-Magied and Mariam Khan, criticizing what they called Barnett’s “strikingly hostile” interview of Zara Mohammed, the first woman and youngest person to be elected Secretary-General of the Muslim Council of Britain, and saying that her line of questioning perpetuated “damaging and prejudicial tropes” about Islam and Muslim women.

In 2019 her book Period. It’s About Bloody Time was released, which covered her experience of endometriosis.