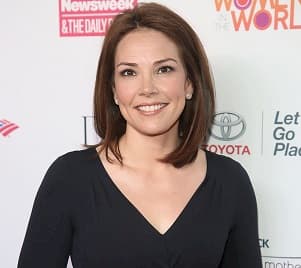 Erica Ruth Hill-Yount is an American media personality working for CNN as a  lead fill-in anchor and national correspondent.   She previously co-anchored Weekend Today ,worked as a co-anchor of  the Saturday edition of The Early Show on CBS and was  the anchor of HLN’s  daytime news program,  “On the Story with Erica Hill”.

She graduated with a BA in Journalism from Boston University in 1998.

Erica is the daughter of Cheryl Hill and Steven Holmes Hill.  Her was diagnosed with head and neck cancer in July 2002 and after undergoing  radiation and chemo he was healed of the cancer but those same treatments ravaged his body for years to come.” My sweet, funny father who loved to cook spent the last eight years of his life on a feeding tube. The radiation killed his salivary glands and the scar tissue made swallowing nearly impossible. It also slowly ate away at his bones. In the summer of 2006, he had spinal fusion surgery; two metal rods were inserted in his neck to hold his head up because his bones could no longer do the job. He died peacefully in
his sleep in the early hours of May 8, 2010. I miss my father every single day. I miss the way he called me “Ruthie”.

She was brought up alongside her sister whose name is not revealed.

Erica is married to David Yount , the Founder and Chief Executive Officer of LicenseLogix. who is is also an attorney licensed to practice law in the states of Georgia and New York. He graduated with a degree in Broadcast Communication from California State University and obtained his J.D. from John Marshall Law School, practicing law in Atlanta, Georgia and concentrating on estate litigation, family law, and small business law.  He also  worked in various leadership roles for Fox Sports, Ziff-Davis Television, and NBC News. Akamai Technologies then recruited him to develop and manage partner relationships for their streaming media division. The duo exchanged their marriage vows in October 15, 2005.

Hill and her husband has two sons ,Weston Robert Yount and Sawyer Steven Yount born in November 25 2006 and March 23, 2010 respectively.

Hill joined CNN in January 2003 as an anchor at Headline News, most recently for Prime News with Erica Hill, a live two-hour interview and news program. She began providing news updates for Anderson Cooper 360° in April 2005 and joined the program full-time in February 2008. She is based in New York.

At Headline News, Erica anchored numerous breaking news reports including the death of actor Heath Ledger, baseball player Cory Lidle flying a plane into a New York high-rise apartment and the Northeast U.S. blackout. She provided political coverage for the network for both the 2004 and 2008 presidential campaigns including updates for Headline Prime and Glenn Beck for the current primary election season.

Among other stories, Hill reported from Mississippi as part of CNN’s coverage of Hurricane Katrina. She also anchored coverage of the war in Iraq, including the discovery of American contractor Thomas Hamill after he escaped his captors there and the Northeast U.S. blackout in 2003. She has also served as a national correspondent for CNN Newsource in the Washington, D.C., bureau.

On June 6, 2016, she was announced as rejoining HLN as the anchor of a daytime news program, and additionally contribute to CNN. Her daily new program, “On the Story with Erica Hill”, premiered in October 2016. On April 19, 2018, it was announced that Erica Hill would return to CNN as lead fill-in anchor and national correspondent.

On September 22, 2008, Hill was named the new co-anchor of the Saturday edition of The Early Show on CBS after filling in on a temporary basis six weeks earlier. Her first show as the permanent anchor was on September 27, 2008.[8] She continued to appear on AC360° for CNN until January 8, 2010, when it was announced on AC360° that she would be leaving CNN immediately to join CBS News. She joined the Early Show cast in January 18 2010

On November 30, 2010, Erica Hill was named co-anchor of CBS’ The Early Show, effective January 3, 2011. On November 15, 2011, CBS announced that Charlie Rose and Gayle King would join Hill as co-anchors of a new CBS News morning program, CBS This Morning, launching January 9, 2012. On July 26, 2012, CBS announced that Hill would be replaced by Norah O’Donnell on CBS This Morning in late 2012.  She also served as a Special Correspondent for CBS News, from September 2012 to November 1, 2012, contributing to all CBS broadcasts although she never appeared on-air in this role.

Prior to joining CNN and CBS, Hill worked for  NBC News as a co-anchor of Weekend Today  and  as an NBC News national correspondent and reporting on MSNBC and NBC Nightly News. Erica also worked at  Tech TV in San Francisco as a co-anchor and correspondent for Tech Live, a 30-minute daily news magazine. Hill was on the air live when the Sept. 11, 2001, terrorist attacks began and anchored throughout the day and as events continued to unfolded.  She also anchored and co-produced specials on a number of topics including the debate surrounding embryonic stem cell research, the technology behind the 2002 Winter Olympics and the 2001 Oscars.

She has an estimated net worth of $ 6 million.