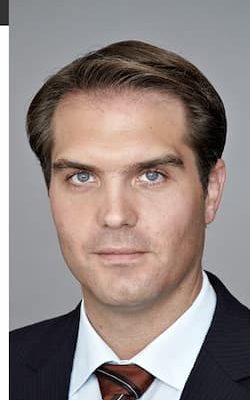 Frederik Pleitgen is a German media personality serving as a Senior International Correspondent for CNN and based at the stations London bureau. He also regularly anchors CNN International’s flagship Amanpour show, standing in for Christiane Amanpour, and previously worked for German television broadcasters ZDF and RTL as well as German news channel  N-TV as a reporter and executive producer.

Frederik was born in1976 in Cologne, Germany.

Pleitgen studied North American Studies at the Rheinische Friedrich-Wilhelms-University in Bonn and at Free University Berlin, where he submitted his master’s thesis on traditions in American journalism. He also spent one year studying at the School of Journalism at New York University and in 2004 received a fellowship for the Institute for Cultural Diplomacy in San Fernando Valley/USA.

Pleitgen is the son of Fritz Pleitgen and Gerda Lichtenberg. His father is a former television journalist and author who has been President of the German Cancer Aid since March 28, 2011. He also served as a long-time director of the WDR and was diagnosed with pancreatic cancer and was operated on in Heidelberg.

“I am very confident that the tumor was discovered at an early stage and was operable. My own situation also makes it abundantly clear to me how important it is to detect cancer early”

He was brought up alongside his three siblings but not much is known about them.

Frederik is married but he has not disclosed much details regarding his wife.

my wife just bought an iphone. We have joined the gang.

It’s not known whether he has any kids.

Pleitgen speaks with a heavy German accent that sounds pleasant while at the same time natural and does not try too much to cover up his origins.

Frederik is a Senior International Correspondent based in CNN’s London bureau. He also regularly anchors CNN International’s flagship Amanpour show, standing in for Christiane Amanpour and interviewing various world leaders and other international newsmakers.nSince joining the international news network, he has brought a uniquely German perspective to CNN´s global audience. Between 2006 and 2014, he was CNN’s Berlin correspondent, delivering insight into the political, economic and cultural influences of this key European power.

He played a pivotal role in CNN’s coverage of the German Bundestag’s-Elections in both 2009 and 2013, while in 2014 he reported on the 25th anniversary of the fall of the Berlin Wall, bringing his own family’s experience of the event to bear in his coverage and has extensively reported on the ongoing conflict in Syria, traveling to Damascus, Homs, Aleppo and many other places in the war town nation. He was also the first international journalist to report from Damascus only days after chemical weapons struck rebel-held areas in 2013 nearly setting off U.S. military intervention. Pleitgen was also on hand in Aleppo when the city fell back into the hands of Syrian government forces in late 2016.

In 2011, Pleitgen was a key reporter during the unrest in the Arab world, reporting from Egypt as the revolution that eventually toppled the Mubarak government unfolded forming part of the team that won an Emmy for its live coverage of the protests in Cairo, and one of the first journalists to get inside the Libyan besieged city of Misrata. He also traveled undercover to Myanmar, which was then ruled by a repressive Junta, several times to report on the aftermath of cyclone Nargis in 2008 and the flawed elections and release of the pro-democracy activist Aung San Suu Kyi in 2010.

Some of the major stories that Pleitgen has covered over the years have included the Asian Tsunami in 2004, the death of Pope John Paul II and the subsequent election of the first German Pope, Cardinal Ratzinger, and now Pope Benedict XVI. Pleitgen, who is fluent in German, English and French, reported from London during the July 2005 terrorist attacks and was dispatched to bring German audiences coverage of the tragic aftermath of both Hurricane Wilma and Katrina in the U.S. Prior to joining CNN, he worked in the political unit at German public service broadcaster ZDF and had previously worked at private news broadcaster N-TV as a reporter and executive producer and also has spent time working for RTL and TV Berlin.

His average annual salary is not available.

His estimated net worth is not known.