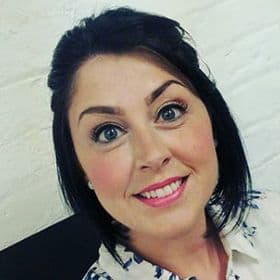 Gemma Longworth is a British TV Furniture up-cycler, restorer and presenter on CH4’s Find It, Fix It, Flog It. She is also the founder and creative director of The Button Boutique and Boutique Workshops.

At the age of 17, Gemma joined the City of Liverpool College, where she completed her AVCE (Advanced Vocational Certificate of Education) in Art & Design, before continuing and completing her Foundation Diploma in Art and Design.

She then joined the University of the West of England where she studied a BA in Drawing and Applied Arts and then completed her Masters in Textile from The Manchester Metropolitan University.

She hasn’t shared much about her family but she shares photos of her mother on her Instagram.

Gemma had a brother known as Sean who died at the age of 8, on August 8, 1996 after he was involved in an accident while he was playing hide and seek in the street with his friend.

“It was August 8, 1996. It was the school holidays and we’d had a lovely family day out and been on a picnic. We lived in Anfield at the time and were at a friend’s house in the same street we lived in. I was inside playing with the sister, and Sean outside with her brother. They were playing hide-and-seek and Sean had hidden between two parked cars, and he was hit when one car reversed. I remember thinking he would just have a broken arm or leg, and that he would be okay. My mum and dad went to the hospital and it was the next day I learned Sean was dead. In fact, he had died on impact.”

She added that her way of expressing herself was through art therapy which was inspired by her late brother who was a great artist at his age.

“Sean was always a great artist, even at that age: he would draw monsters or Sonic the Hedgehog, he was really passionate about it. So I became interested in it because I wanted to keep it going for him. It became my art therapy, my way of expressing myself.”

In 2012 she created an art-therapy book to help children deal with bereavement.

“Writing the book was difficult for me and I didn’t realise that I hadn’t grieved properly myself until I started writing it. I feel like a weight has been lifted off my shoulders and I can look at the book, not as a negative experience, but as a celebration of Sean and I hope it will help other children who unfortunately find themselves in the same situation I was in.”

Gemma got married to Michael Barker on September 15, 2019.

She is the owner and creative director of The Button Boutique which she launched in 2008. She teaches workshops, hosts events and parties and tutors clients of all ages and abilities in art and crafts.

Gemma founded the workshop while she was working as a volunteer at Alder Hey Hospital and began running an arts and crafts workshop twice a week. The interest in her workshops grew and began taking them outside of the hospital, to café’s in the city, holding more and more classes. She then rented two large sheds at the Baltive Creative and began running her workshops from there. In 2014 she outgrew the space and started to look around for larger properties, before finding a building on Brick Street which she describes as a ‘hidden gem’.

Gemma Longworth Find It, Fix It, Flog It

She is a cast member of Channel 4 reality series, Find It, Fix It, Flog It alongside Simon O’Brien and Henry Cole. Henry Cole and Simon O’Brien travel across the UK to find unique items lost in people’s homes to fix up for a profit.

In 2012 Gemma published her book ‘I Need Help’, an art-therapy book to help children deal with bereavement. The book was motivated by her own experience as she lost her brother when she was 11 years old.

During an interview with Liverpool Echo she said; “Writing the book was difficult for me and I didn’t realise that I hadn’t grieved properly myself until I started writing it. I feel like a weight has been lifted off my shoulders and I can look at the book, not as a negative experience, but as a celebration of Sean. And I hope it will help other children who unfortunately find themselves in the same situation I was in.”

She added that the book is an activity book and it encourages the children to express themselves in certain aspects of grieving.

“It’s an activity book, very interactive, in which the main character is a bear which a child can name, draw his expressions when he is happy or sad and draw his clothes. And through it, children are encouraged to express themselves in certain aspects of grieving. It’s getting them to open up.

The bear has a rucksack filled with stones and he goes on a journey, stopping along the way. Each time he stops he takes out a stone which becomes an activity. At the end of the book there are no stones left in his rucksack, and a weight has been lifted off his shoulders.

It can even be used by a parent or guardian who may not know how to speak to the child, getting them to open up which will hopefully help them in itself and/or encourage them to want to talk to someone about how they feel.”

All in a days work..