CELEBRITIES
4 days ago
by April R 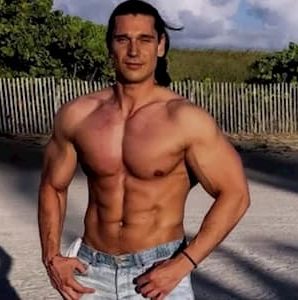 Georgi Rusev is an American based model and masseuse from Bulgaria. He is engaged to reality television personality Darcey Silva, best known for her role on TLC’s reality television shows 90 Day Fiancé: Before the 90 Days and Darcey & Stacey.

He is a certified massage therapist and works with Home Spa Therapy. He is a former personal fitness trainer. On the Home Spa website, he says he decided to “start my own private practice and offer a customised approach to your needs. Being physically active and having a background as an athlete has given me a deeper understanding of how to treat sore muscles and pains.

I have designed my sports massage to manifest a great balance of personalized pressure, stretching and relief. I believe that exceptional massage is an essential part of a whole well-being. That is why I have created a sequence of beautiful movements for a full body flow that you can find in my signature massage.”

George is a former model. He revealed that he immigrated to the United States and began working as a lifeguard and was doing modeling part-time.

“I’m here in the United States for eight years. I was doing modeling, part-time, but Washington DC didn’t have too much modeling jobs, and I became a massage therapist.”

Rusev is in a relationship with ’90 day Fiance’ star Darcey Silva. the couple met on social media and connected face-to-face in Miami during Super Bowl weekend. Silvia said the connection was instant.

“So after Tom and I broke up, I took my time to heal before deciding to meet [Georgi]. We ended up meeting in Miami in February during Super Bowl and we just had a lot of fun together. We were friends first but when we finally met, there was an instant attraction. It was almost like we were a couple already, in a sense. We had established a friendship and then it was suddenly like, ‘Woosh, what is this?’ and ‘Oh my God, I’ve never felt like this’”.

She added that the relationship was different from his previous relationships with Brooks and Jesse Meester.

“He’s really one-of-a-kind. He’s so genuine and compassionate and very affectionate. He really dotes over me. He’s very much a relationship type of guy. Plus he’s sexy and hot on the outside and on the inside he’s so loving. He gives me a lot of attention and he’s very, very sweet. He also has a very calm demeanor and we just have a lot of fun together. What I love the most about being with him is that I can just be myself. I let my hair down, make-up or no make-up. We’re very compatible and everything just fits.”

According to an episode on TLC Darcey & Stacey, Darcey revealed she had learned that Georgi was still married but separated and was going through a divorce. He confessed that he had been married for three years.

In a confession, Darcey tells a producer, “I haven’t said anything to anybody — not even you guys. It just started to feel like I needed to talk about it with someone other than Georgi because I need to understand it myself. He told me that he’s still married but he’s separated, going through a divorce.”

Georgi doesn’t have a child.

On October 14, 2020 People magazine reported in an exclusive that the couple had been engaged since June. Silva said the engagement was a total surprise but she has not been able to celebrate it with everyone due to the pandemic.

“I still feel newly engaged. I haven’t been able to really celebrate it yet with everybody. I want to be able to shout it to the world. It was definitely a total surprise for me. Georgi and I have a very deep connection, and I feel like in that moment I was not expecting it at all.”

The couple had moved in together earlier in the year when the pandemic hit. Rusev revealed that it was hard for him to plan the surprise proposal. “It was really hard to find the ring, make calls, make the reservation for the boat, for dinner.”