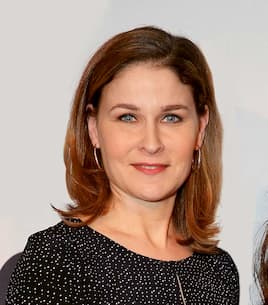 Hala Basha-Gorani  is an American media personality working as an anchor and correspondent for CNN International, based in London. She  anchors CNN’s Hala Gorani Tonight weeknights at 8 p.m. CET and also co-hosted Your World Today with Jim Clancy.

Gorani earned a Bachelor of Science in economics from George Mason University near Washington, D.C. and graduated from the Institut d’Etudes Politiques (Sciences Po) in Paris in 1995.

Gorani was born to her parents who were Syrians from Aleppo. During her  childhood, she  moved with her family to Algeria where her father was working. Her  parents later  separated and Hala  moved to Paris to live with her mother until the end of her  teens. According to  Twitter post in 2014 , her mothers name is Nour

Gorani was brought up alongside her elder brother whose name is unknown.

Hala is  married to Christian Streib, a CNN   senior photojournalist .The duo  tied the knot in June 2015 in Jardin Majerelle, Morocco.

Gorani speaks fluent Arabic, English and French. During a question and answer interview, she said she understands Arabic very well and  can speak it too .She is also fluent in French and her first step into the world of journalism was actually in print, when she wrote a story for a French newspaper .Hala also  first appeared on TV aged 24 in a French program. She loves Arabic food and among her favourite dishes are Tabouleh, Hummos and Kebbeh.

Hala joined CNN in 1998 from Bloomberg Television in London, where she worked as an anchor. She also worked for French network France 3, covering stories for the French cable network Paris Premiere. At CNN, she has covered major stories including ,the Syrian refugee crisis in Lebanon in 2014, the 2012 Egyptian Elections and has previously reported extensively from Jordan and Egypt. She was instrumental in CNN’s coverage of the Arab Spring.

In 2010 Gorani covered the devastating earthquake in Haiti, for which CNN’s coverage was recognized with a Golden Nymph award – one of the highest honors in international journalism – at the Monte Carlo Television Festival last year. She previously hosted Inside the Middle East show for five years where she reported on several colorful and thought-provoking stories including poverty in oil-rich Bahrain; everyday struggles for artists living in Iraq; and gay life in the Middle East, which was a first on international television and earned a nomination for a Gay & Lesbian Alliance Against Defamation (GLAAD) award.

Gorani  has reported from every country in the Middle East including Saudi Arabia, Iraq, Israel, Jordan and the Palestinian territories. She was instrumental in CNN International’s coverage of the Israel-Hezbollah conflict in 2006, for which CNN won an Edward R. Murrow Award. Gorani was also one of the CNN journalists awarded a News and Documentary Emmy for the network’s coverage of the 2011 Egyptian revolution that led to the ousting of the country’s then president, Hosni Mubarak.

In early 2009 she presented The Middle East Challenge, a special hour-long program that took an insightful and thought-provoking look into the problems and promise facing the Middle East. In 2008 she  attended the World Economic Forum in Davos, Switzerland and moderated the closing session that featured several business and political leaders including Tony Blair, Nobel Peace Prize Laureate Elie Wiesel and JP Morgan Chase & Co. Chairman and CEO James Dimon.

Hala has an estimated net worth of $2 million.