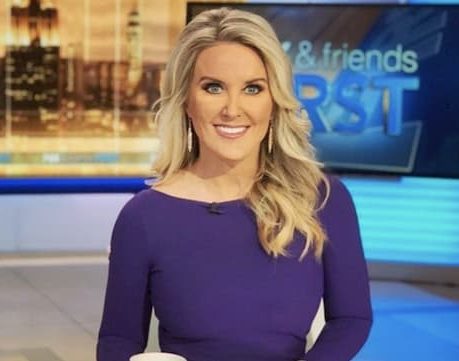 Heather Childers is an American media personality serving as a national news anchor at NewsMax. She served as an anchor of the first hour of Fox & Friends First for Fox News Channel.

She holds a Bachelor of Arts degree in English from the University of North Carolina at Chapel Hill.

She is the daughter of Tobe and Barbara Childers. She has a sister known as Scarlett who is an elementary teacher.

Great to be home with family for Thanksgiving! Hope everyone had a happy and safe one with family & friends. I’m also thankful for the @foxfriendsfirst & @foxnews family who has joined since we launched ‘Fox & Friends First’ in 2012. Thank you and thanks for making the move with me to 4am a year ago when we expanded. I will see you back on Monday at 4am ET!

Heather is not married but she is in a relationship with Tom Zban, who works as a radiologist in Charlotte.

Childers joined Fox News Channel in November 2010 as a reporter and in August 2011 she became an anchor for America’s News Headquarters. At the beginning of 2017 she became an early-morning host at Fox, she was the host of the first installment of Fox & Friends First, from 4-5 a.m.

In July 2020 it was confirmed that Heather had been fired from Fox News. This was after she was benched in late March after she went to work visibly sick. CNN reported that on March 18, she had been visibly ill on and off the camera, as workplaces were taking precautions against the spread of the coronavirus.

On March 31 she tweeted that she “coughed & sneezed last week on air & mentioned during a segment w a doctor the next day I went to see a dr to make sure I didn’t have a temperature or cough of type described as concern. Wanted coworkers safe. Dr said everything was normal. Haven’t been back since Hope to be soon.”

She added that she tested negative for the coronavirus.“No. Last day I was on I mentioned I had gone to a dr to make sure I had no fever or cough of concern after coughing & sneezing on air. Never went to work feeling sick. I sent those results showing no temp or cough. Was then told Covid19 test would most helpful. Negative.”

I’m back ❤️ Great day co-hosting On @newsmax with @emmarechenberg & @bobsellers1! Join me again tomorrow, Friday, from 3-5PM! I’ll be with Bob & Emma from 3-4PM and then @rob__schmitt from 4-5PM 😃 TGIF 🇺🇸

In 2018 Heather underwent surgery on her neck to correct cervical spinal stenosis with myelopathy, a condition that causes compression of the spinal cord in the neck.

The condition was as a result of serious injuries she sustained to her head and neck in a car accident as a teenager. The condition had been slowly and very quietly worsening. The symptoms which included trouble walking, spasticity, muscle weakness and numbness — became progressively more frequent and consequential over the past year.

She experienced shooting pains in her head while she was on air which finally got her to see a doctor who recommended surgery ASAP. Without it, they told her, the myelopathy could very well eventually render her paralyzed.

“The neurosurgeon who first looked at me — the one that ultimately was my surgeon — he showed me that my right foot was dragging as a result of my spinal cord being mashed, basically, and that was what was causing me to trip and fall.”

At the same time her father was in the middle of a battle with prostate cancer, “so I had debated putting it off until after he finished his radiation treatments … but then the week prior to my surgery, my left foot started dragging, too. So they were right when they said I needed surgery as soon as possible.”

“The surgery itself involved three areas of my spine in my neck. The affected discs and bone spurs were removed from an incision in the front of my neck. (The surgeon) then fused together the open spaces between the vertebrae by implanting a bone graft from a bone bank and then secured everything together with a titanium metal plate and screws.”

Great end to the week with some familiar friends and new friends on @newsmax today! Fun to work with @rob__schmitt again and another busy day with @bobsellers1 and @emmarechenberg! Thanks to everyone who watched. I appreciate every one of you ❤️ Thank you! 🇺🇸