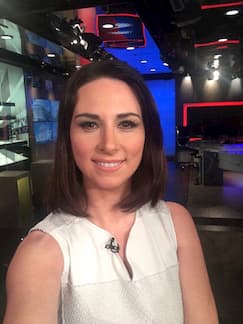 Heidi Przybyla is an American media personality working as an NBC News Correspondent . She previously served as a senior political correspondent of USA Today as well as a White House reporter, Senior Political Reporter and a Congressional Reporter for Bloomberg News  based in Washington D.C.

Przybyla was born on 18 November 1973, in Alexandria, Virginia USA.

Heidi graduated with a Bachelor of Arts in International Relations and German from Michigan State University in East Lansing and also attended Albert-Ludwigs-Universitat Freiburg in Breisgau for a year.

She is the daughter of John Przybyla and Mary Przybyla .  She hasn’t revealed much information about her family but she revealed on a twitter post that her father moved furniture to get her through college. In May 11, she revealed through a twitter post that her father was fighting for his life in hospital, “Our sweet father is in a coma on a ventilator fighting for his life. (pneumonia in both lungs & a major cardiac arrest. He tested negative for COVID) 2 days ago, he called to say he had chills & chalk it up to low blood sugar, cracking that’s good cuz he’s not ready to go.”  Unfortunately her dad passed away on May 12, 2020 age 75.

Heidi was brought up alongside her three siblings,  Colleen Przybyla, Rebecca Przybyla and Nicholas Przybyla but she hasn’t revealed much information about them.

Przybyla is married but she has kept the identity of her husband off the limelight therefore it’s not known who her husband is or what he does and neither has she revealed the date and where the two exchanged their marriage vows.

Heidi and her husband have two children together, a daughter born in 2009 and son who was born in 2014.However she hasn’t revealed their names.

Heidi  is an NBC News correspondent who regularly breaks exclusive reporting on the White House, the Trump Administration’s Cabinet, the U.S. House of Representatives and U.S. Senate, nationwide congressional elections, and more.

She  obtained a memo to the FBI and text messages that then-Supreme Court nominee Brett Kavanaugh was communicating with former classmates to proactively refute sexual harassment claims. In addition, a press adviser who had been leading the Senate Judiciary Committee’s response to the sex assault allegation against Kavanaugh resigned moments after Przybyla broke news that he was fired from a previous job in part because of a sexual harassment allegation against him. Przybyla was also the first reporter to obtain internal Dept. of Health and Human Services notes and emails showing the Trump administration’s abrupt cancellation of a federal program to prevent teen pregnancy was directed by political appointees over the objections of career staff. Days later, HHS agreed to pull back, at least temporarily, its earlier decision to cancel the program outright. She also interviewed  retired Sen. Majority Leader Harry Reid after he left the Senate warning of Russian interference in the U.S. election.

Prior to joining NBC News, Przybyla was previously senior political reporter at USA TODAY, where she was the lead reporter covering Hillary Clinton’s campaign and the broader 2016 presidential field. She also served as a political, White House and congressional reporter at Bloomberg News based in Washington. As a White House correspondent, Przybyla covered the end of President Bill Clinton’s time in office as well as President George W. Bush’s administration, including reporting from the White House during the terrorist attacks on Sept. 11, 2001. She  has covered every presidential election, except one, since 2000 and also served as Bloomberg’s lead poll writer.

Heidi made a disputable statement about the US President Donald Trump and she was pulled into a controversy. During the Clinton vs Trump presidential campaigns on 7 October 2016, she posted a cryptic tweet against Donald Trump stating ‘the men who say @realDonaldTrump hot mike is just how you all talk in private? Later in February 2017, she made an appearance on MSNBC’s ‘Hardball with Chris Matthews’ show. In that show, she made a polarized statement about Trump and implied that his stance on anti-semitism lacked credibility. Also, she received some backlash for making such a harsh statement while some agreed with her.

He has an estimated net worth of $1million.