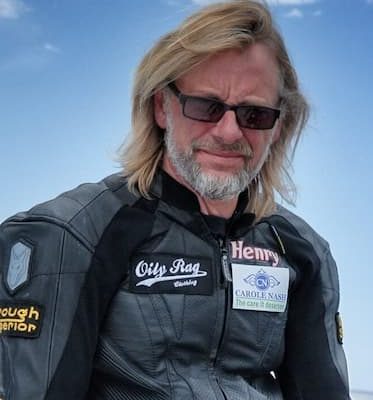 Henry Cole is a motorcycle enthusiast and TV presenter best known for World’s Greatest Motorcycle Rides, The Motorbike Show and Find It, Fix It, Flog It. He is also the CEO of Gladstone Motorcycles.

He was educated at Eton College.

During an interview with Telegraph UK, he revealed that he was born into a fairly privileged, upper middle-class family. His father was a former Army major who left the army in 1964  to become an MP but failed dismally because his radical political views didn’t go down well with his local Conservative association.  His mother was a housewife. His maternal great-great-great-great-uncle was William Ewart Gladstone, the Victorian prime minister.

“I was born into a fairly privileged, upper middle-class family and grew up in a remote 14-bedroom Victorian rectory in Norfolk. The only thing my father, an eccentric former Army major, knew how to do was kill someone; all my mother knew was how to be his unpaid servant. She spoke like a divinely stoic Fifties BBC radio announcer.”

Cole is married to Jane Cole, there is no public information available about her. The couple has two sons Charlie and Tom and resides in the Cotswolds.

Henry is a motorbike enthusiast. He is the founder and CEO of Gladstone Motorcycles, a British motorcycle brand. (The company is named after his great uncle Dick ‘Red­beard’ Gladstone, a true British eccentric who instigated Henry’s passion for classic British motorcycles at the tender age of eight).

As a biker he set a world land speed record for a pre-1955 750cc motorcycle, riding a Brough Superior on the Bonneville Salt Flats in 2013.

He has traveled the world and ridden hundreds of unique bikes, and his aim is to share his enthusiasm for riding in general, wiping away any cultural clichés about motorcyclists.

“I wanted to tell as many people as possible that motorcycling is NOT a subculture, that people who ride aren’t going to come round your house and burn it down, that we’re actually pretty decent guys and girls… hopefully, like me.”

Henry Cole Find It, Fix It, Flog It

Henry presents Find It, Fix It, Flog It alongside Simon O’Brien. They travel across the UK to find unique items lost in people’s homes and fix them up for profit.

He has also directed over 70 TV commercials for brands like Flora, Mastercard, Top Up TV, Dixons, TFL, Amstrad among others.

Henry was a heroin addict for five years (between ages 19 and 24) but has since been clean. He is involved in trying to help other addicts and share his experience in battling addiction.

During an interview with Telegraph UK he said his lowest point was “in the late Eighties I became a virtual recluse. I couldn’t even face going out to get drugs and had them delivered by dispatch riders at a cost of £7,000 a year. Weirdly, the only people I ever saw were Luke and Matt Goss from the pop band Bros, who lived in the flat upstairs.

I went into a serious mental decline and stopped paying the mortgage on the flat I shared with my then girlfriend, who left me. Not long after several failed suicide attempts, my belongings were repossessed.

The final nail in the coffin was when a tabloid newspaper ran a front-page story about me under the headline, “Heroin Henry, peddler of death, deals drugs in Bros house”. Thankfully, my parents stood by me. The other thing that helped me get clean was my burning ambition to get back into television.

Narcotics Anonymous is the most expensive club you can join. I spent half a million pounds getting in.”

A Biker’s Life: Misadventures On (and Off) Two Wheels by Henry Cole is published by Quercus at £20

He wrote his memoir “A Biker’s Life: Misadventures on (and off) Two Wheels”. He said he “felt I had a story to tell of people who have lost their way in life and didn’t really know what they were rebelling against but demanded in some way, however small, to be an individual. Motorcycling is an intrinsic part of that ethos.”