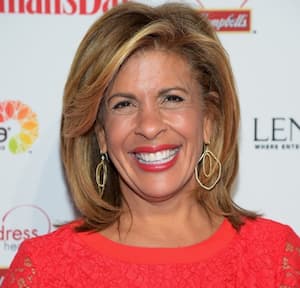 Hoda Kotb is an Egyptian American media  personality and author working as  a main co-anchor of the NBC News morning show Today and co-host of its entertainment-focused fourth hour. She previously served as a correspondent for the television news magazine program Dateline NBC.

She was born on9 August 1964 in Norman, Oklahoma, United States.

She is an Egyptian American.

She attended Fort Hunt High School before joining Virginia Tech where she  graduated with a Bachelor of Arts degree in broadcast journalism.

Hoda is the daughter of Sameha (“Sami”) and Abdel Kader Kotb. Her mother worked at the Library of Congress while her father was a fossil energy specialist and was listed in the Who’s Who of Technology but unfortunately died of a heart attack at the age of 51 in 1986. She was brought up in Morgantown, West Virginia and Alexandria, Virginia and also lived in New Orleans throughout the 1990s. Her parents are from Egypt and her family lived in Egypt for a year, as well as in Nigeria.

During a 92nd Street Y interview, Kotb hinted at her Muslim roots when she recounted her memories of annual summer vacations in Egypt and her veiled cousins and how her parents’ migration to the United States had spared her from having to do the same. “We met our cousins who looked just like us. Some of them had the head cover on. I still remember going, ‘Oh, my God. Like that could have been me.’ You don’t realize the gift your parents give you when you leave.”

She was brought up alongside her  brother, Adel  and  sister Hala. Hoda  recalled how her sister came through for her during one of the lowest moments in her life, when she learned she had breast cancer. “That was like a dark chapter, but that’s usually when you need your sister the most,” she said.

She described one particular moment when she had a hard time undergoing a body scan in an enclosed machine and her sister, Hala, refused to leave her side .“I had to go into a tube or some kind of MRI, whatever it was — and I was scared to go in, Hala sat next to me. And they said to Hala, ‘You can’t be in there. Because of the radiation, you can’t be in there.’ And she said, ‘I’m not leaving.’ And she sat there through the whole thing.”

Hoda was diagnosed with breast cancer in February 2007 after her gynecologist discovered lumps in her breast during a routine exam. In March 2007, she underwent a mastectomy and reconstructive surgery for breast cancer and has since become an advocate for breast cancer awareness. She allowed Today cameras to follow her throughout her cancer battle and after she was declared cancer free, she has continued to document and use the story on the show to raise awareness for breast cancer. In 2011, Martina McBride asked Kotb to be featured in her music video for “I’m Gonna Love You Through It,” a ballad dedicated to cancer survivors.

Kotb has been in a relationship with Joel Schiffman New York financier since 2013. The two met in the summer of 2013 when Hoda was speaking at an event for Wall Street professionals. She was signing books after her talk when Joel approached her. The duo later got engaged  after he popped the question while having a little dinner on the beach. In October 2016, she  revealed the couple was moving in together. She was previously married to Burzis Kanga former University of New Orleans tennis coach, in 2005 but the marriage ended in divorce in 2008.

Hoda and her husband has two adopted daughters, Haley Joy adopted  in February 2017 and Hope Catherine adopted in April 2019. In a People interview, Hoda explained that treatment for breast cancer left her unable to conceive. Her husband also has a daughter from a previous relationship.

Kotb officially joined NBC News in April 1998 as a correspondent for Dateline NBC and all NBC News platforms. She was the first host of Today’s first fourth-hour weekday morning broadcast at 10:00 a.m. in September 2007and was joined by Kathie Lee Gifford as a co-host in April 2008. Gifford was later succeeded by Jenna Bush Hager in April 2019, following Gifford’s departure from the show.

In February 23, 2015, Kotb began hosting a live, one-hour show twice a week on Sirius XM’s Today channel, discussing casual, water cooler topics. In January 2, 2018, she was named co-anchor of Today with Savannah Guthrie after former Today show anchor, Matt Lauer, was dismissed from NBC News following accusations of sexual misconduct. Prior to the announcement, she had been the interim co-host with Guthrie immediately following Lauer’s dismissal in November 2017. Together, Kotb and Guthrie make up the show’s first female anchor duo to lead the show.

In October 2010, Kotb released a New York Times bestselling autobiography, Hoda: How I Survived War Zones, Bad Hair, Cancer, and Kathie Lee. In January 15, 2013, she released her second book, Ten Years Later: Six People Who Faced Adversity and Transformed Their Lives, in which she chronicles six stories by identifying a life-changing event in each subject’s life and then revisiting each of those six people a decade later. In 2016, she released her third book, Where They Belong: The Best Decisions People Almost Never Made, which features a selection of various stories of inspiring people who “found themselves” in completely unexpected moments or unforeseen circumstances.

In October 2019, she released her sixth book, I Really Needed This Today, which includes personal notes about her experiences and relationships, an assortment of quotes, and 365 sayings that she hopes inspires and uplifts readers. She released a follow-up in October 2020 titled This Just Speaks to Me, which expands on her daily reflections and includes additional personal anecdotes and quotes.

She earns an annual salary of $7 million.

She has an estimated net worth of $30 million.