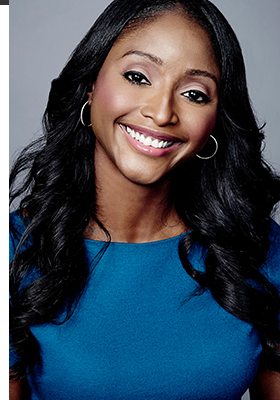 Isha Sesay is a British journalist of Sierra Leonean descent. She worked as an anchor and correspondent for CNN International from 2005 to 2018.  In addition, she was the presenter of the 360 Bulletin on Anderson Cooper 360°. In 2012 Sesay  joined HLN as a co-anchor for Evening Express. She left CNN in 2018 to support a girl’s education project called W.E. Can Lead for African girls.

She has a height of five feet three inches.

Sesay studied at the private Fourah Bay College School in Freetown. At the age of 16, in 1992 she moved to the UK for further study and college. After completing her A-levels, she was accepted into Trinity College, Cambridge, where she read English. During her final year, she began writing to media groups seeking work.

Her mother, Dr. Kadi Sesay, taught at Fourah Bay College, Freetown before she was appointed as an advisor to the government of Valentine Strasser in 1992. Her father worked as a legal advisor to the Sierra Leone Produce Marketing Board (SLPMB) before his death in 1988.

She has an older sister and a younger brother.

Sesay married Leif Coorlim, a CNN staffer in 2013. The couple had a gorgeous ceremony which Sesay referred to as “magical“. When describing the wedding, she said “our day exceeded my wildest dreams. It was magical. When I saw Leif standing at the end of the aisle, I felt as if my heart would explode. I married the man of my dreams in front of the people we care about the most.” Unfortunately, the couple divorced a few years later.

Isha is an anchor and correspondent for CNN International. She is based at the network’s global headquarters in Atlanta.

She anchors ‘CNN News Center’, a half-hour, weekday news program on CNNI that takes viewers through the day’s big stories of global importance. She also hosts ‘Backstory’, the weekly program that goes behind the scenes of CNN’s global newsgathering operation, and often files reports for ‘African Voices.’

She joined CNN in November 2005 from the UK broadcaster ITN, where she anchored ITV’s Early Morning News program, as well as news bulletins for the UK’s most watched breakfast program ‘GMTV.’

Prior to this, she spent more than three years presenting ‘Good Morning Sports Fans’ for Sky Sports. From 1998-2001, Sesay presented a wide range of programs across the BBC networks.

On 2 August 2018 Sesay announced that she was leaving CNN after 13 years. She cited the media’s focus on United States President Donald Trump as a reason for her decision.

In 2014, she launched W.E. Can Lead (Women Everywhere Can Lead), an educational, humanitarian, non-profit organization. It was created to support African girls in receiving educational support to become future leaders. In August 2018, the program was mostly working with Nigerian girls, but it is open for girls from everywhere in Africa.

There is no reliable information about her net worth.