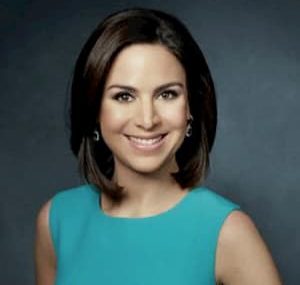 Jackie DeAngelis is an American journalist serving as a financial correspondent for FOX Business Network. She previously served as CNBC’s chief energy correspondent as well as the anchor of online commodities program, ‘Futures Now’.

She has a Bachelor of Arts degree in Asian Studies and History from Cornell University. She also holds a Juris Doctor from Rutgers School of Law.

Jackie has managed to keep her personal life private; there is no available information about her marital status.

DeAngelis is a financial correspondent for FOX Business Network. She joined the station in April 2019 where she covers breaking business news out of the network’s headquarters in New York.

In May 2019, DeAngelis participated in FBN’s capitalism vs. socialism town hall where she presented a special five-day segment series on the growing economic debate between the two contrasting ideologies surrounding the event.

Jackie spent 13 years at CNBC where she served as the network’s chief energy correspondent as well as the anchor of online commodities program, Futures Now. She contributed market reports across CNBC’s daily programming as well as covered the economic impact of events such as, Hurricane Irma, Hurricane Harvey and the Dakota Access Pipeline protests.

She began her career at the station serving as CNBC’s Director of Strategic Programming and Development where her Investing in America: A CNBC Town Hall Event with President Obama special was nominated for an Emmy Award. She also
produced various network exclusives featuring businessmen such as Berkshire Hathaway Chairman and CEO Warren Buffett, former Treasury Secretary Timothy Geithner and President Bill Clinton, among others.

She was stationed in the Middle East from 2010 to 2011 where she interviewed business titans like, OPEC Secretary General Abdalla El-Badri and Saudi Arabian Finance Minister Ibrahi Al-Assaf for CNBC International.

DeAngelis left CNBC in December 2018 and joined Yahoo Finance, serving as the anchor of the midday program “The Ticker.” She broke down the top financial stories driving the day while also conducting interviews with business leaders and industry experts including U.S. Shell President Gretchen Watkins and JPMorgan Chief Economist Anthony Chan.

Her actual salary is unknown but some websites states her salary is estimated to be around ‎$117,352 annually.

Jackie’s net worth is under review.