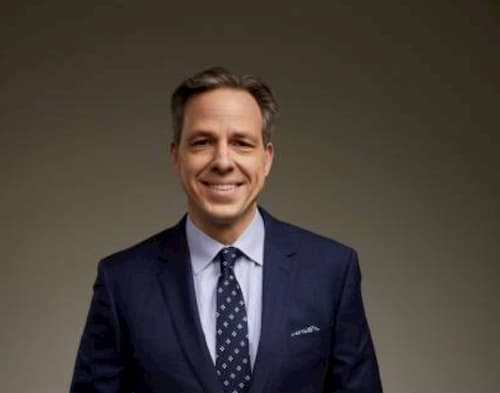 Jacob Paul Tapper is an American media personality , author, and cartoonist. He is the Chief Washington Correspondent for CNN, and hosts the weekday television news show The Lead with Jake Tapper and the Sunday morning public affairs program State of the Union. He previously  worked for ABC News as Senior White House Correspondent.

He stands at a height of 6 feet 0 inches tall.

He is the son of Theodore S. “Ted” and Helen Anne Tapper. His mother, who is originally from Canada, retired as a psychiatric nurse at the Philadelphia Veterans Affairs Medical Center. His father, from Chicago, graduated from Dartmouth College and Harvard Medical School and went on to serve as the president of South Philadelphia Pediatrics and associate clinical professor of pediatrics at Jefferson Medical College. His parents divorced in 1977.

Jake was brought up alongside his brother Aaron J. Hahn Tapper , the Mae and Benjamin Swig Associate Professor in Jewish Studies and the Founder and Director of the Swig Program in Jewish Studies and Social Justice at the University of San Francisco. He is also the author the book  Judaisms: A Twenty-First-Century Introduction to Jews and Jewish Identities

Jake is married to Jennifer Marie Brown who worked  as a regional field manager in Washington, D.C. for Planned Parenthood Federation of America and  graduated from the University of Missouri-Kansas City .She is  the daughter of Thomas. H Brown, the former owner of a US 1 Dollar, an independent general merchandise store in Lenexa, Kansas, and Linda M. Brown, formerly a customer service supervisor for Southwest Airlines. Tapper was in Des Moines in 2004 covering the Iowa caucuses for Good Morning America when he first met Brown.  The duo started dating before exchanging their marriage vows in 2006.

Tapper and his wife has two children, a daughter, Alice Paul Tapper, already a published author and a son, Jack.

In June 2015, Tapper became host of CNN’s Sunday political show, State of the Union with Jake Tapper. There, he has become known for challenging politicians of all stripes, including challenging Senator Bernie Sanders to release his tax returns, asking Jeb Bush why Hillary Clinton is responsible for Benghazi if his brother George W. Bush bears no responsibility for the terrorist attacks on 9/11,  asking Hillary Clinton about the FBI investigation into her private email server and asking Donald Trump if he would denounce support from white supremacists, the Ku Klux Klan, and David Duke– referred to days later as “the infamous Tapper-Trump exchange” by Mitt Romney in his March 2016 speech condemning Trump.

On September 16, 2015, Tapper moderated two Republican primary debates from the Ronald Reagan Presidential Library in Simi Valley, California. The main debate drew an average of 23.1 million viewers, making it the most watched program in the history of CNN and the second most watched primary debate ever. He also moderated the March 10, 2016 Republican presidential debate in Miami, which drew almost 12 million viewers[6] and according to Variety “garnered acclaim for its substance.”

In 2017, he received the Walter Cronkite Award for Excellence in Television Political Journalism from the USC Annenberg School for Communication and Journalism.  Also in 2017, he received the John F. Hogan Distinguished Service Award from the Radio Television Digital News Association. In 2018, Tapper was part of a four-person team at CNN that included Carl Bernstein, Jim Sciutto, and Evan Perez that won the Merriman Smith Award for broadcast reporting on the White House under deadline pressure.”

Tapper joined ABC News in 2003. Here, Tapper covered a range of topics including work in the ABC News Baghdad bureau, from New Orleans after the failure of the levees after Hurricane Katrina, and from Afghanistan. From March to July 2010, he was interim anchor of ABC’s This Week, hosting the program until Christiane Amanpour became the anchor. He was named Senior White House Correspondent on November 5, 2008. In 2010, 2011, and 2012, the White House Correspondents’ Association awarded him the Merriman Smith Memorial Award for presidential coverage under deadline pressure. He was a key part of the ABC News coverage of the inauguration of President Obama that was awarded an Emmy Award for Outstanding Live Coverage of a Current News Story.

In addition to his reporting, Tapper has also authored four books, including his debut novel The Hellfire Club, published in 2018, The Outpost: An Untold Story of American Valor, published in 2012, Down and Dirty: The Plot to Steal the Presidency, which was published in 2001, and Body Slam: The Jesse Ventura Story, which was published in 1999. The Outpost, debuted in the top 10 on The New York Times best seller list. Tapper’s book and his reporting on the veterans and troops were cited when the Congressional Medal of Honor Society awarded him the “Tex” McCrary Award for Excellence in Journalism.

Jake has also contributed cartoons to The American Spectator magazine, the Los Angeles Times, and The Philadelphia Inquirer. During the week of May 23, 2016, Tapper guest illustrated the Dilbert cartoon. The original drawings were auctioned online to raise money for the Homes for our Troops Foundation.

He earns an annual salary of $4 million.