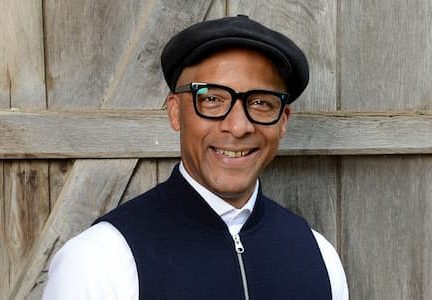 Jay Blades is a modern furniture restorer, upcycler, eco-designer and Award-Winning​ BBC Presenter on The Repair Shop & Money for Nothing.

Jay is the son of Barbara and Trevor. He was brought up by his single mother in East London. He first met his father at the age of 21. He told The Daily Mail that at the time his father revealed he had four other siblings but he found out he actually had 25 in total.

‘He told me I had four other siblings but I then found out that wasn’t true at all. I have 25 in total, including six in America, two in Africa and three in Jamaica. I’ve met 11 of them and I am really close to my half-sister, Sophie.’

Jay was married to Jade but they divorced in 2015. The two met while they were studying at university. while studying at Bucks New University. Jay was studying a BSc in Criminology and Philosophy, while Jade was completing a BA in Textiles Design and Art. The two volunteered for youth organizations for years before they founded their own charity group Out of the Dark. The charity helps disadvantaged young people to learn design and craft skills, using the help of volunteering experts.

Blades is in a relationship with his partner Christine Goodman, who he began dating in 2016. Christine works as a marketing specialist for consumer goods and retailers.

Jay has three biological children. He revealed to the Daily Mail that at the age of 25 he had fathered two children by different mothers.

‘I didn’t even think about settling down. Growing up, I only knew of two families where the mum and dad were married. I loved the ladies I was with but things didn’t work out and I moved on, even though I always stayed in touch with my children. I didn’t want to be like my father.’

Blades has a daughter known as Zola Erguvanli Blades with his ex-wife Jade. She joined drama school in 2020. He is also a stepfather to his partner’s daughter, Paris Goodman.

THOUGHT OF THE DAY Good morning all please join me in congratulating my beautiful daughter @zola.blades in getting a place at the @nationalyouththeatre Well done Baby you have Definitely put the work in, Love You 😘.

Will Kirk is not the son of Jay, they both appear on The Repair Shop. Will is a repair craftsman and expert in wood restoration. He studied Graphic Design and Antique Furniture Restoration and Conservation at the University of the Arts and London Metropolitan University, respectively., He traveled to Italy with the Worshipful Company of Painters and Stainers to represent the UK at the annual Salon Decorative Arts Fair and in 2012 he also set up his own London-based workshop.

Jay is the host of The Repair Shop on BBC, he appears alongside experts; Steve Fletcher, Suzie Fletcher, Will Kirk, Lucia Scalia, and Dominic Chinea.  The show debuted in 2017on BBC Two but in 2019 it moved to a prime time slot on BBC One, but is now also the face of spin-off show The Repair Shop: Fixing Britain, which takes a deeper look into certain repairs to examine how items shape the way we live now.

Jay presents Home Fix on BBC One, a DIY show where he shares tips and tricks to help viewers become self-sufficient in their own homes, through a range of simple demonstrations from his own workshop, aided by a rich catalogue of BBC home and garden archive.

Jay has a front gold tooth.

Good morning all, I will lose some followers because of this video but this is how I feel and I want to see solutions in my lifetime. Let me know what you think, please. http://bit.ly/JnCo1960What (LINK IN BIO)