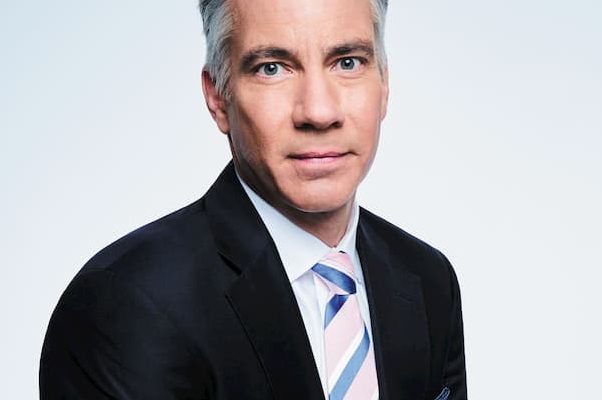 Jim Sciutto is an American author and media personality serving as CNN’s chief national security correspondent and co-anchor of CNN Newsroom airing Monday through Friday from 9 to 11 a.m. ET alongside Poppy Harlow.

Sciutto graduated with a major in Chinese history in 1992 from Yale University.

He belongs to Italian heritage.

He is the son of Elizabeth Sciutto and Ernest Sciutto. His father died in 2007 and was a US Navy veteran.

Jim is married to Gloria Riviera since October 2006. She was previously married to William Hughes III before they got divorced. She is a journalist serving as an ABC News correspondent based in Washington D.C. She covers a wide array of breaking, investigative and feature stories for the network’s flagship broadcasts Good Morning America, World News and Nightline. She also contributes regularly to ABC News Digital and ABC News Radio.

He is a father of three children; two sons Tristan James and Caden Charles; and a daughter named Sinclair Elizabeth.

Jim serves as CNN’s chief national security correspondent and co-anchor of CNN Newsroom airing Monday through Friday from 9 to 11 a.m. ET alongside Poppy Harlow. He reports and provides analysis across the network’s programs and platforms on all aspects of U.S. national security including foreign policy, the military, intelligence community.

He has reported from throughout Asia, Europe, the Middle East and the Arctic with the U.S. military and senior U.S. leaders and played a key role in CNN’s overseas coverage of the Charlie Hebdo and Paris terrorist attacks in France and the violent elections in the Ukraine.

His one-hour CNN special, Targeting Terror: Inside the Intelligence War earned him a 2016 Headliner Award for documentaries and his reporting from inside Iran during the 2009 election protests earned him an Edward R. Murrow award. He was also awarded the George Polk Award and a citation for Excellence from the Overseas Press Club for his undercover reporting from Myanmar, where he bucked government restrictions to tell the stories of that country’s repressive regime. Additionally, his reporting for the series Iraq: Where Things Stand was recognized with an Emmy Award for two consecutive years.
Along with CNN colleagues Jake Tapper, Carl Bernstein and Evan Perez, Sciutto was awarded the White House Correspondence Association’s Merriman Smith Award in the broadcast category for their January 2017 report on how the intelligence community believed Russia had compromising information on then President-elect Trump.

Jim served as ABC News’ senior foreign correspondent, based primarily in London and later in Washington. He reported from more than 50 countries across the globe including dozens of assignments from inside Iraq, Afghanistan and Iran. Prior to joining ABC News, he served as the Hong Kong-based correspondent for Asia Business News. He began his career as a moderator and producer of a weekly public affairs talk show on PBS.

Jim is the author of three books; Against Us (2018), The Shadow War: Inside Russia’s and China’s Secret Operations to Defeat America (2019) and The Madman Theory: Trump Takes On the World (2020).