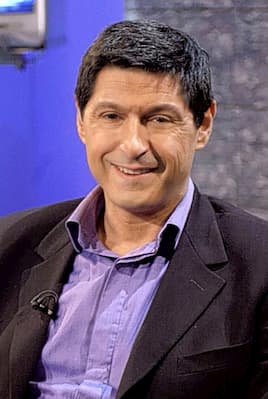 Sopel attended the Christ’s College,  Finchley before joining The University of Southampton where he  graduated with an honors degree in Politics and sociology.

Jon is the son of Miriam Sopel  and Myer Sopel who was the Vice-President of the Association of Jewish Youth . His family moved from Stepney to north London when he was eleven. He once described his parents as ‘pillars of the East End Jewish community. The elder Sopels were longstanding wardens at the Oxford and St. George’s Jewish Youth Club in Stepney .

Jon is married to Linda Twissell who he met  while working at Radio Solent. Jon and Linda exchanged their marriage vows in 1988.  Their honeymoon destination was  the Masai Mara in Kenya.

Jon and his wife Linda has two children, a daughter Anna and a son Max.

Sopel joined the BBC in 1983 as a reporter and producer for BBC Radio Solent. He later became the chief political correspondent for BBC News 24 . He was also   the BBC’s Paris correspondent for three years. Here, covered stories including the French ban on the importation of British beef, the millennium celebrations in Paris, the oil spill in Brittany, the French presidency of the EU in 2000 and the Concorde crash in July 2000. During the 2003 invasion of Iraq, Sopel was the BBC’s correspondent in Kuwait City.

In 2005, Sopel became the main presenter of  The Politics Show on BBC One . Here, Sopel interviewed key politicians and advisers, including Prime Minister Tony Blair, opposition leader David Cameron, Jack Straw, Gordon Brown and US Secretary of State Condoleezza Rice. He was appointed as a presenter for BBC News Channel in 2003. Here,  co-presented the BBC News Channel on weekday afternoons between 2 pm and 5 pm – alongside Louise Minchin each Tuesday to Thursday and alongside Emily Maitlis on Mondays.

During major political stories, such as elections, he reported on location for the BBC News Channel and BBC News at One. He made occasional appearances on BBC One news bulletins as a relief anchor. He has also appeared on PM on Radio Four, Breakfast News, BBC News at One, BBC News at Six and BBC News at Ten as well as fronting BBC Two’s annual coverage of the UK political party conferences, Conference Live. He has also been an occasional stand-in presenter for Newsnight, and has made past appearances on Breakfast, HARDtalk and The Daily Politics.

In October 2012, it was announced that he would present the new programme, Global with Jon Sopel, airing 1500 to 1630 GMT every Monday to Thursday on BBC World News. In January 2014, Sopel had a rare interview with the Emir of Dubai, Sheikh Mohammed bin Rashid Al Maktoum. He was later  appointed the BBC’s North America Editor. In 2020, Sopel began presenting the BBC podcast, Americast, alongside BBC Newsnight presenter Emily Maitlis and Chief North America Reporter Anthony Zurcher.

Prior to joining BBC, Jon worked as a freelance writer and broadcaster.

Sopel has authored several books including, If Only They Didn’t Speak English: Notes From Trump’s America2017,A Year At The Circus: Inside Trump’s White House .

On 20 October 2010, Sopel broke his hip when he crashed his motor scooter by skidding on fallen leaves travelling to Westminster. He failed to realize the extent of his injury until he had completed his journey, subsequently needing surgery. He told his colleagues, “I thought I had just given myself a dead leg at first and that the pain would ease – but it didn’t it became unbearable.”

He has an estimated net worth of $1.5million.