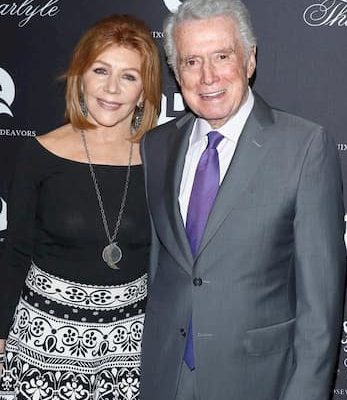 Joy Philbin born Bette Joy Senese is an American media personality and actress known for her roles in Miss Congeniality 2: Armed & Fabulous (2005), Malibu Express (1985) and Night and the City (1992). She is the wife of the late media personality Regis Philbin.

Joy began her career as an actress and has appeared in TV shows and movies such as Miss Congeniality 2, Malibu Express, and an episode of Mad About You, according to IMDb. She also hosted HGTV’s At Home With… and the syndicated home show, Haven. She occasionally co-hosted, Live with Regis and Kathie Lee, and also occasionally co-hosted with Regis on Live with Regis and Kelly in Kelly Ripa’s absence, until he retired.

Joy married Regis Philbin in 1970. During an interview in 2011, at the time they were married for 41 years they were asked their secret to a long and happy marriage to which Regis jokingly replied; “What is the secret, Joy? My fear of you?”

Joy responded; “There’s just something about Regis. There’s always something new on the horizon and it keeps our lives active and fun. I’d rather be with Regis than any other person in the world.”

Over the years he also hosted Miss America pageants and game shows like ABC’s “Who Wants to be a Millionaire.” He was inducted into the National Association of Broadcasters Hall of Fame and the Television Academy Hall of Fame in 2006.

Regis was previously married to Catherine “Kay” Faylen for 13 years in the 1950s and 1960s. Catherine was an actress and since their divorce, she stayed out of the spotlight.

Joy and her husband Regis have two daughters together; Joanna Philbin (b. 1973) and Jennifer Joy (aka J.J. Philbin, b. 1974). The two are successful writes. Joanna has published four novels geared at teenage readers, while J.J. Philbin has been a writer and producer for New Girl, Single Parents, and The O.C., and is married to writer and producer Michael Schur of Parks & Recreation fame.

He died on July 25, 2020. His family released a statement to People which read; “We are deeply saddened to share that our beloved Regis Philbin passed away last night of natural causes, one month shy of his 89th birthday. His family and friends are forever grateful for the time we got to spend with him – for his warmth, his legendary sense of humor, and his singular ability to make every day into something worth talking about. We thank his fans and admirers for their incredible support over his 60-year career and ask for privacy as we mourn his loss.”

Regis Philbin Cause of Death

Regis official cause of death has not been made public but according to TMZ he died of a heart attack.