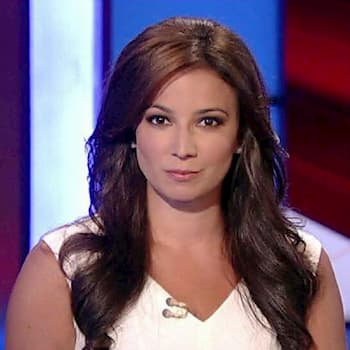 Julie Banderas is an American media personality working as a general news correspondent and  news anchor for the Fox News Channel and based in New York City. She  serves as a primary fill in anchor Monday–Friday and also   hosted Fox Report Weekend. She was  previously a weekend anchor at WNYW-TV (FOX 5) in New York.

She was born on 25 September 1973 in Hartford, Connecticut, United States.

Banderas graduated with a bachelor’s degree from Emerson College in Boston.

She is the daughter of Howard D. Bidwell  Fabiola R. Bidwell. Her father passed away in 2010 and  was a Navy veteran and civil engineer who started his own company called Consolidated Precast, Inc. He  obtained a B.S. in Civil Engineering from Bucknell University and served on the Republican Town Committee and member of the Zoning Board of Appeals. He was also a charter member in founding the Farmington Rotary Club. According to his obituary, he was married three times. His first wife was Banderas’ mother, Fabiola who was from Colombia.

Julie is married to Andrew Sansone Banderas’ husband, Andrew J. Sansone a financial advisor at his own firm, called Andrew Sansone, CFP Allied Wealth Partners and a  member of the board of directors of Habitat for Humanity and founding president of both Old Rock Media and Big Apple Channel. The duo met during a Fox News set. She was asked to host a Habitat for Humanity event which had been put together by Sansone who was on the board of directors. He eventually got to ask Banderas out to dinner and they began dating. He later proposed marriage to her with a message in a bottle while they were clam digging on Long Island Sound. She announced their engagement during an episode of America’s Election Headquarters on September 21, 2008. The two later exchanged their marriage vows  at Fifth Avenue Presbyterian Church in August 29, 2009.

Julie and her husband has three children together, two daughters and a son.  Addison Melissa Sansone born on 29 August 2010, Avery Julie Sansone, born on 13 November 2012 and Andy Harrison Sansone born on 21 May 2016.

Julie joined FOX News Channel in 2005 as a general assignment reporter. She  serves as the network’s general news  correspondent based in New York. She also  served as a rotating anchor for FOX Report (Saturdays 7PM/ET) and America’s News HQ (Saturdays 1PM/ET). While at the network, she provided live coverage of the 2013 New York City mayoral race, the crash landing of Southwest Flight 345 at LaGuardia Airport (LGA), the inauguration of Pope Francis and Hurricane Sandy. Additionally, she has contributed to health and wellness stories for the network.

Banderas has also  reported on several big stories, including Hurricane Dennis in 2005, the disappearance of U.S. student Natalee Holloway who went missing in Aruba in 2005, the legal case of Terri Schiavo from Florida and the murder of 9-year-old Jessica Lunsford by a registered sex offender.

Prior to joining FNC, Banderas was the weekend anchor at WNYW-TV (FOX 5) in New York, NY and also served as an anchor for several local news stations, including WFSB-TV (CBS 3) in Hartford, CT, WHSV-TV (ABC 3) in Harrisonburg, VA and WBRE-TV (NBC 11) in Wilkes-Barre. In 2004, Banderas was awarded the “Outstanding Single Newscast” Emmy award for her coverage of the Republican National Convention.

She has an estimated net worth of $12million.