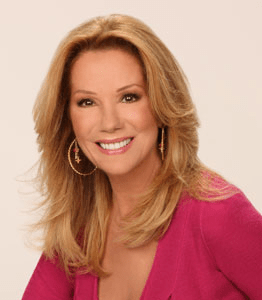 Kathie Lee Gifford is an American television presenter, singer, songwriter, occasional actress and author. She is best known for her 15-year run (1985–2000) on the talk show Live! with Regis and Kathie Lee, which she co-hosted with Regis Philbin. She is also known for her 11-year run with Hoda Kotb, on the fourth hour of NBC’s Today show (2008–2019).

Kathie went to Bowie High School and graduated in 1971. At Bowie, she was a singer in a folk group, “Pennsylvania Next Right”, which performed frequently at school assemblies. She also attended Oral Roberts University in Tulsa, Oklahoma, studying drama and music.

Kathie Lee married Paul Johnson, a Christian composer/arranger/producer/publisher, in 1976. They gained fame in Christian music, appearing on covers of Christian magazines. But the marriage was strenuous from the start and in 1981, Johnson moved out. The couple divorced in 1982.

On October 18, 1986, Kathie Lee married a second time, this time to Frank Gifford, an American football player and television sports commentator. It was his third marriage after marriages with Maxine Avis Ewart and Astrid Lindley.

Frank died on August 9, 2015, from natural causes at their Greenwich, Connecticut, home at the age of 84. In 2017, she released “He Saw Jesus”, a very personal song Kathie Lee co-wrote (with songwriter Brett James) and dedicated to her husband.

Reflecting on her first marriage to Paul Johnson, a composer, was particularly difficult for Gifford. After meeting at Oral Roberts University, where Gifford was a student, the pair wed in 1976, but it was a sexless marriage. “I was excited about starting a life with someone, but he didn’t feel the same way,” she says. “I felt humiliated sleeping in my guestroom.”

“It was so damaging to me on so many levels, damaging for me emotionally as a woman to be rejected after saving myself all those years,” she says. “And then it was so disappointing on a spiritual level, because I had to ask the Lord, ‘How did I get this so wrong anyway?’ I don’t even like to call him my husband because he wasn’t in the truest sense of the word.”

Fearful of divorce’s stigma, she toughed it out for six years — and then he left her. “I was relieved,” she says. “I realized, you know what, we can make all the vows we want in life, but if both people don’t want the same thing, it’s not going to work out. And I was very hopeful that one day I would find a real love.”

On June 24, 1985, Gifford replaced Ann Abernathy as co-host of The Morning Show on WABC-TV with Regis Philbin. The program went into national broadcast in 1988 as Live! with Regis and Kathie Lee, and she became well known across the country. Throughout the 1990s, morning-TV viewers watched her descriptions of life at home with her sportscaster husband Frank, son Cody, and daughter Cassidy. Gifford left the show on July 28, 2000.

Philbin and Gifford were jointly nominated eight consecutive years in a row (1993 to 2000) for Outstanding Talk Show Host during the Daytime Emmy Awards.

On March 31, 2008, NBC announced that Gifford was joining its morning show, Today, as co-host of the fourth hour titled Today with Kathie Lee and Hoda, alongside Hoda Kotb. Kotb and Gifford replaced Ann Curry and Natalie Morales.

On December 11, 2018, it was announced that she was leaving Today in April 2019. Her final Today Show appearance was on April 5, 2019 with a party, including a video by her children Cody and Cassidy Gifford. In 2019, they won the Daytime Emmy Award for Outstanding Informative Talk Show Host.

Gifford left Today in order to pursue a movie career both as an actress, and as a director and producer. In 2018 she filmed Then Came You in which she co-stars with Craig Ferguson. In 2018 she also filmed a Hallmark Christmas movie for Hallmark Movies & Mysteries called A Godwin Christmas.

She intends to make movies about the experiences of losing a loved one and being a widow, which she considers an underrepresented topic in Hollywood. She has several projects in the works including sequels to Then Came You.

Her most recent gig for being a co-host of Today allowed her to earn $5 million per year.