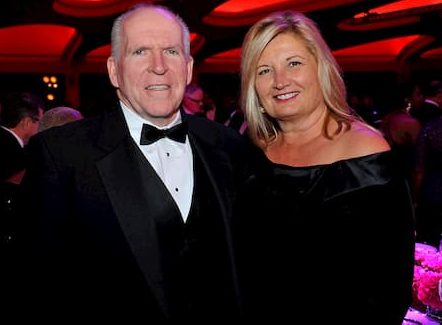 Kathy Pokluda Brennan is an American Homemaker and the wife of the former director of Central Intelligence Agency John O. Brennan. He also served as a chief counterterrorism advisor to Former US President Barack Obama.

Kathy belongs to the Czech ethnicity.

Kathy is a mother to three children; a son named Kyle and twin daughters Kelly and Jaclyn.

Who is John Brennan

John is a former American intelligence officer who served as the Director of the Central Intelligence Agency (CIA). He also served as the Deputy National Security Advisor for Homeland Security and Counterterrorism, and Assistant to the former President Barack Obama. He previously adviced Obama on foreign policy and intelligence issues during the 2008 election campaign and presidential transition.

In October 2015 his email account was hacked and posted on WikiLeaks. The email contained sensitive personal information, including a draft of Brennan’s Standard Form 86 (SF-86) application.

John is President Trump critic and has publicly questioning his mental acuity and fitness for office. Trump on the other hand has also publicly attacked Brennan through twitter questioning his mental acuity and called him a liar, a leaker and blamed him for having “detailed knowledge of the (phony) Dossier,” a reference to the raw intelligence reports on Trump’s alleged Russia ties by British former MI-6 officer Christopher Steele.