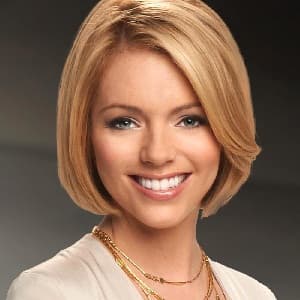 Kayla McCall Tausche is an American media personality serving as an on-air correspondent for CNBC and based at the station’s Washington, D.C. She also serves as a fill-in anchor for the network’s Business Day programming and previously worked at the Associated Press in Brussels, Bloomberg News in New York, and DealReporter in New York and London.

Kayla attended the Greater Atlanta Christian School in 2004 and later graduated with honors in business journalism and international politics from the University of North Carolina at Chapel Hill, where she was an Ameel J. Fisher scholar. She sits on the alumni board of the UNC journalism school.

Tausche is the daughter of Karen C. Tausche and Kurt C. Tausche. Her father is the owner of the brand development and advertising agency of Atlanta. She hasn’t revealed any further information regarding them.

It’s not known if Kayla has any siblings since she hasn’t revealed any information regarding them if she has any.

Tausche is married to Jeffrey Jacob Izant. He works in Brooklyn as a law clerk and previously served as a law clerk in the United States District Court for the Eastern District of New York. He is the son of Dr. Lisa Izant the vice president of the school board for the Fayetteville-Manlius Central School District and Dr. Timothy H. Izant an Orthopedic Surgeon and the Chief of Orthopedics at Crouse Hospital and medical director of SOS Plus. Jeffrey is a  Princeton graduate and also went to Columbia University for his law degree The couple tied the knot on 11 April 2015 at the Christ the King Cathedral in Atlanta in a ceremony officiated by Francis G. McNamee, a roman catholic priest.

Kayla and her husband are proud parents of a baby girl Catherine Clancy Izant who was born on September 12, 2018

Tausche joined CNBC in January 2011 as a general assignment reporter covering corporate finance and deals for CNBC’s business day programming and currently serves as an on-air correspondent based at CNBC’s Washington, D.C. bureau and focuses on the intersection of government and business. Her reporting appears on television and CNBC’s digital platforms. She also serves as a fill-in anchor for the network’s Business Day programming and also contributes to MSNBC, Today, Weekend Today, and NBC Nightly News with Brian Williams.

Tausche was previously a co-anchor of CNBC’s “Squawk Alley” (M-F, 11 AM-12 PM ET) and focused on the big money backing technology and innovation. She has also covered the banking industry, as well as corporate finance and deals— and frequently breaks news. Tausche has reported on a wide variety of high-profile stories, including the historic Brexit vote, the Facebook, Twitter, and Alibaba IPOs, the Occupy Wall Street movement, the MF Global bankruptcy, and the News Corp. phone-hacking scandal.

Tausche has received acclaim for her coverage of various high-profile stories. The Financial Times featured a picture of Tausche with media mogul Rupert Murdoch on its front page while she covered the News Corporation phone hacking scandal and has also appeared on Washington Week in Review. Prior to joining CNBC, Kayla began her journalism career with posts at the Associated Press in Brussels, Bloomberg News in New York, and DealReporter in New York and London.