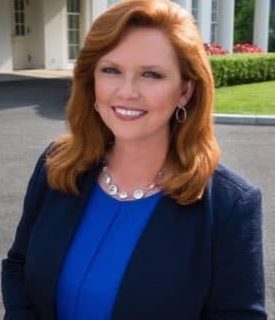 Kelly O’Donnell  is an American media personality serving as a political reporter for NBC News and also serves as White House and Capitol Hill correspondent. She appears on NBC Nightly News, Today, Meet The Press, and MSNBC and previously served as a reporter and anchor at WJW TV in Cleveland, Ohio.

O’Donnell  attended Villa Angela, a Catholic school in Cleveland and later graduated from Northwestern University in 1987 with a Bachelor of Science in Education degree, focusing on a combined course of study in journalism and public policy.

Kelly  is the daughter ofJosh O’ Donnell and Kristien O’ Donnell who were  Irish immigrants, Her father  was a businessman who did a lot of traveling and her mother was a dancer and her grandparents on both sides came from Ireland and she maintains Irish citizenship.

She was brought up alongside her sister Jenny O’Donnell who is also a journalist.

Kelly is married to Award-winning photojournalist J. David Ake. He was the deputy bureau chief for visual journalism at the AP Washington bureau and was promoted to director of photography for The Associated Press in 2018.

O’Donnell and her husband has not welcomed any children yet.

Kelly joined NBC News  as a news anchor and substitute host on the Weekend Today program and the weekend edition of Nightly News and has been based in Washington D.C ,New York and Los Angeles.. She also contributed reports to the primetime news magazine Dateline NBC before finally becoming a White House correspondent for NBC News  during the second term of George W. Bush; following the 2008 presidential campaign season, she became Capitol Hill correspondent.

O’Donnell has covered the Bush Administration, Congress, and several presidential campaigns including John McCain’s in 2008. In 2016, she was the first to report live on television that Hillary Clinton has called Donald Trump over the phone to concede the presidential election. During the Iraq war, she was embedded with the 3rd Infantry Division, stationed in Baghdad and Qatar. In addition, O’Donnell has reported a wide variety of events, including the September 11 attacks, the space shuttle Columbia disaster, the Oklahoma City bombing, and the O.J. Simpson trial. O’Donnell reported on the travels and death of Pope John Paul II. She also covered both summer and winter Olympic games.

Prior to joining NBC News, she served as a reporter and anchor at WJW TV in Cleveland, Ohio, in the 1990s. At this time, O’Donnell worked with former NBC reporter Martin Savidge when WJW was still a CBS station in Cleveland.

O’Donnell was inducted into the Cleveland Journalism Hall of Fame in 2011 and the Ohio Radio/Television Broadcasters Hall of Fame in 2004. She has received many honors, including Emmy awards, a National Headliner award, a New Hampshire Primary Award for Political Reporting, and Los Angeles Press Club awards..