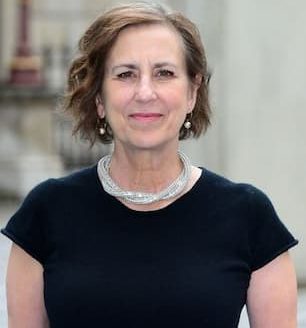 Kirsteen Anne “Kirsty” Wark is a British media personality serving as a  presenter best known for fronting BBC Two’s news and current affairs programme Newsnight since 1993 and has also presented the BBC Radio 4 series “The Reunion” and occasionally presented “Start the Week” on BBC Radio 4. She previously presented Radio 4’s The World At One.

Wark was born on 3 February 1955 in Dumfries, United Kingdom.

Wark was educated at Kilmarnock Grammar Primary and subsequently Ayr’s independent Wellington School and later studied history at the University of Edinburgh.

Kirsty is the daughter of Jimmy Wark and Roberta Wark. Her mother worked as a schoolteacher while her father was a solicitor and a senior partner in the firm of Wilson, Chalmers and Hendry. He won the Military Cross at the Normandy landings while he was an officer with the 2nd Battalion the Glasgow Highlanders, and was wounded in battle. He also served as an assistant in Castle Douglas, Kirkcudbrightshire as well as depute procurator-fiscal at Kilmarnock before becoming a senior depute fiscal in Glasgow.

She was brought up alongside her brother Allan Wark.

Kirsty married Alan Clements in 1989 after meeting on the BBC Scotland programme Left, Right, and Centre. Alan is the co-founder of Glasgow-based independent TV producer Wark Clements & Co and served as managing director and grew the business from start-up to a £10m turnover and then negotiated the merger with Ideal World to create IWC Media, Scotland’s largest independent producer. He previously served as Director of Content at STV Productions and also worked for the BBC as a researcher and sub-editor in the newsroom.

Wark had a “medical menopause” at the age of 47, after a hysterectomy and after coming off hormone replacement therapy(HRT) because of fears over its reported link to breast cancer and has been visible and vocal in the media about her experience of menopause and helped to raise awareness of this aspect of women’s health more widely. In 2017 she made a BBC documentary ‘Let’s talk about the menopause’ because she felt that women are still “shockingly ill-informed”

Wark joined the BBC in 1976 as a graduate researcher for BBC Radio Scotland, before promotion a year later as producer of Good Morning Scotland and current affairs programmes. She then switched to television in 1982, producing Reporting Scotland and the lunchtime political programme Agenda and current affairs series Current Account. She then moved into presenting, fronting Reporting Scotland, Seven Days, Left, Right and Centre and Scottish Questions coverage for BBC Scotland, before moving to network television as part of the Breakfast Time presenting team.

In 1988, she was one of the first reporters to cover the Lockerbie disaster. In 1990, Wark demonstrated her distinctive line of questioning in an interview with Prime Minister Margaret Thatcher. She was a presenter on BBC2 arts programme The Late Show (from 1990–3) and the heritage programme One Foot in the Past. In 1999, she presented The Kirsty Wark Show, her own interview programme and has been a presenter on the BBC programme Newsnight since 1993. During the 1990s, she presented many programmes produced by her production company Wark Clements & Co, including Words With Wark, Restless Nation, Building A Nation and Lives Less Ordinary.

In 2006, she presented a series of programmes on BBC television about countries on the continent entitled Tales from Old Europe. In June 2006 she interviewed Harold Pinter. Wark hosted the 10th annual Glenfiddich Spirit of Scotland Awards on 30 November 2007 for STV. She made a cameo appearance in the 2008 Doctor Who episode “The Poison Sky”. She replaced David Baddiel as host of the BBC Four programme The Book Quiz in 2008 and hosted a BBC Two quiz show, A Question of Genius, which ran from 2009 to 2010. In 2011 she was chosen to host a BBC food quiz show entitled A Question of Taste, pitting two teams of food fanatics against one another.

Wark participated in the 2011 series of Celebrity MasterChef where she reached the final and narrowly lost out to Phil Vickery. On 1 January 2012, Wark appeared in a cameo role as herself in the revival of the BBC’s Absolutely Fabulous. In January 2013 she appeared in a special series of The Great British Bake Off, where she was awarded Star Baker. Later that year, she made a cameo appearance in two episodes of The Politician’s Husband which aired on BBC Two. Since 2020, she has presented the BBC Radio 4 series “The Reunion” and has also, on occasion, presented “Start the Week” on BBC Radio 4.

Wark was named journalist of the year by BAFTA Scotland in 1993 and Best Television Presenter in 1997. She was also nominated for the prestigious Richard Dimbleby Award for Best Television Presenter (Factual, Features and News) in the BAFTAS 2000 and was listed as one of the fifty best-dressed over 50s by The Guardian in March 2013. She was also elected a Fellow of the Royal Society of Edinburgh in March 2017.

She is the author of two novels, The Legacy Of Elizabeth Pringle and The House By The Loch.

She has an estimated net worth of $1.9 million.